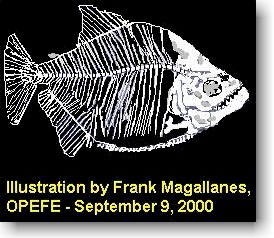 About The Genera of Piranhas and Caribes

Including The Fossil Record

The information provided here is condensed from published accounts. The copyrighted material may not be used for any purpose other than private study, scholarship or research. Cited information requires credit and this link www.opefe.com. All rights reserved. All images shown  (unless otherwise noted) is property of OPEFE.

Identifications are always the best approximation given the quality of the information at hand. It can be vague and doubtful if one does not have the specimen (e.g. photo only) or examining the specimen directly can substantially corroborate it. Even then, given the historical problems, in some cases one can only make the best educated guess. The important issue is to provide the information that will allow people to understand that.

Below is information that I have taken and condensed from a well-published article by John Lundgren. His research into the fossil record and Amazonia is outstanding and good reading for anyone interested in exploring this topic.

About 90 million years ago, South America and Africa (both of which had earlier been part of the southern super continent of Gondwana) separated from each other. Both  piranhas and pacus were pretty much similar appearing, about 15 million years ago (during middle Miocene). Long before the Pleistocene, the Amazon teemed with species that are closely related to fishes alive today in the river. A fossil of a 13-million-year-old fish was excavated in Colombia which was a fish that was no longer found in the rivers of central Colombia, a pacu! Some fossil catfishes, lungfishes, and characins date back to the Late Cretaceous period, 70 million years ago. As South America, which comprised a continental plate, moved west, it crashed against an oceanic plate moving east. The collision caused the land along the west coast of South America to rise up, and the first stage of Andean mountain building began. During this long history, the Andes underwent several phases of uplift and subsidence.

As the mountains grew, adjacent land to the east and north buckled, forming a trough-like basin running north and south. At times the basin was filled with sediment; at wetter intervals it contained large lakes, was periodically inundated by shallow ocean waters, and channeled major rivers in a north–south direction. Taken together, the formation of Andean and other land barriers, the shifting courses of rivers, and sporadic incursions of ocean waters would have produced many opportunities for fish species to evolve as some populations were isolated from others and began to adapt to new conditions. Fish like the tambaqui...whose fossil and modern jaws and teeth reveal unmistakable similarities, have, except in the restless edges of their ranges, changed little over the past 15 million years (John Lundberg, 2001). Today many species of piranhas/caribe and pacus are found in the new world. Piranhas can weigh as much 6 pounds in Brazil and Venezuela, most are eaten by people than the other way around, while pacus can grow over 3 feet long and weigh as much as 65 lbs!

"Observations made by ichthyologists now show that, in these tributaries, the species distribution of the Serrasalmidae family-to which the piranhas belong-is highly structured-and in a quite different way from that prevailing in the Amazon's main course. In the higher reaches of the tributaries fish are found that live in the rapids, like the 'mylesine', a herbivore, also the 'coumarou', a frugivore, and the 'pacou dente seco' with a broader feeding habit. In the lower lengths, approaching the confluence with the Amazon, piranhas and 'pacous' exist that are nevertheless absent from the main course of the river. This particular distribution structure of Serrasalmidae occurs repeatedly from one tributary to the other.

Conversely, certain species inhabit specifically the waters of the Amazon and the area which it floods each year, the varzea. Examples are the 'Pirapitinga', the 'pacou manteiga', the 'tambaqui', a mainly frugivorous fish which can however feed off plankton and can reach 30 kg and 80 cm in length, prized by Amazonian people. Another is the 'red piranha', a carnivore living in the shallow lakes.

The Amazon therefore appears to be an almost insuperable barrier for many species, setting apart a large faunal domain-the tributaries-which from north to south extend over more than two million square kilometers. What can explain such marked contrast in distributions of these fish between the large main river and its tributaries?

The biological diversity observed in the two faunal domains, demonstrated especially in the variety of feeding habits, indicates that this distribution cannot be linked just to present ecological conditions (water quality, food chain etc) of the two environments. According to the specialists the origins of this arrangement are traceable back to 15 million years ago (the Miocene or Tertiary) because, judging by fossil specimens of Serrasalmidae, the oldest of which in South America dates back to 15 million years ago, it appears that the two distinct groups became separate from the Miocene onwards. In fact, the fossils recovered have been attributed to the species 'tambaqui' and 'pirapitinga', all characteristic of the silty waters of the main Amazon. However, among the fossil faunal assemblages, none of the species now present in the clear waters emanating from the Precambrian massifs have been identified. Since the Miocene the two Serrasalmidae communities, one from the silt waters originating from the Andes, the other from the clear-water tributaries from the Precambrian plateau, would therefore have evolved independently from each other. This species distribution, on either side of the barrier that the main course of the Amazon now represents, is therefore a living record of the faunal organization characteristic of the original Amazon Basin.

This contrast between the Amazon and its tributaries is repeated in aspects other than species distribution. The waters of the main river course have a higher biomass and indeed most of the fish caught in the Amazon Basin come from there, but the species diversity found is lower than in the tributaries. This is an important finding for conservation and wetland heritage management policies in Amazonia which must take account of this complex faunal structure."

To read up on Megapiranha paranensis, a new species of fossilized piranha click on this link.

USE YOUR BACKSPACE OR CLICK HERE TO RETURN RESEARCH PAGE