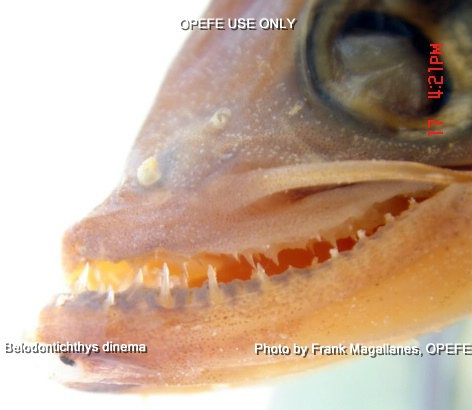 Since originally writing this article in 1995, another species has been discovered and described in 1999. That species was named Belodontichthys truncatus.

The genus Belodontichthys dinema was proposed by Bleeker (1858) in his revision of siluroid fishes. The genus consisted of the type species (dinema) which he had previously described as a member of the genus Wallago (Bleeker, 1851). Bleeker's specimens were from Borneo; since then the species has been recorded from Sumatra, Java, Laos, Vietnam, Thailand, Kampuchea, and Malaysia (Haig, 1959; Kottelat, 1985, 1989, Roberts, 1989). The genus was originally recognized as monotypic and assigned to the family Siluridae.

Even for a siluroid Belodontichthys has an extraordinary external morphology.

The head is narrow with a straight to concave dorsal profile (formed by the anteriorly extended dorsal body musculature). The eyes are large, set at the corner of the mouth; the jaws long, and obliquely angled, with the lower jaw extending anteriorly beyond the upper; both jaws are armed with three rows of arrow-shaped tips. The maxiliary barbel extends only to the pelvic fins; and the single pair of mandibular barbels are shorter than the diameter of the eye. Gill-rakers are elongate, numbering ca 30. 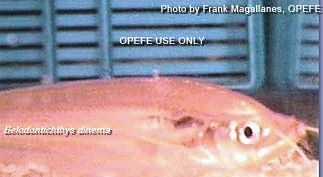 In spite its peculiar morphology, the anatomy of Belodontichthys has not previously been described. Perhaps this is because it is not abundant in museum collections although relatively common in nature (Haig, 1950).

The habits of Belodontichthys are poorly known. Smith (1945) remarks that the fish occurs in deeper waters and feeds on migratory schools of young cyprinids. We are informed by Mr. Chavalit Vidthayanon that the fish usually stays close to the substrate or in the middle of the water column but takes its prey from near the surface. Adults congregate in small groups of 5-10, subadult groupings usually comprise of more than 10 individuals. Adults feed primarily on fishes, and juveniles on insects and crustaceans. Eggs are adhesive. An excellent game fish which can be caught using hook and line. Presently large numbers are being taken near Stung Treng in Cambodia by explosives. Marketed fresh or dried and salted. Examples of live B. dinema at OPEFE clearly substantiates the observations by Mr. Vidthayanon. They tend to swim mid-water and feed almost exclusively on small live fish.The head and jaws of juvenile Belodontichthys appear much as in Wallago but during development the jaws become obliquely aligned. Whether the epaxial muscle continues to extend foRward onto the cranium during early development is unknown.

Belodontichthys falls into the category of teleosts which Ganguly & Chatterjee (1963) referred to as 'bilaterally compressed snapping teleosts' and in which they included Ompok and Eutropiichthys. Belodontichthys displays a morphotype which at first sight one might label as typically that of a 'neck-bending' teleost but closer examination reveals that this 'typical' morphology in fact characterizes the converse functional situation, namely one providing a rigid rather than flexible framework, presumably allowing more powerful biting forces.

I coined the common name Malaysian Toothed Catfish after conferring with Mr. Lee Finley (1995), a well-published author and expert on catfishes. Mr. Finley was sent an OPEFE video of Belodontichthys while the specimen was being raised from a juvenile (6.5cm) to its mortality size of 26cm. Specimens imported into the United States are rare and often mistaken for genus Ompok. OPEFE maintains specimens in formalin.