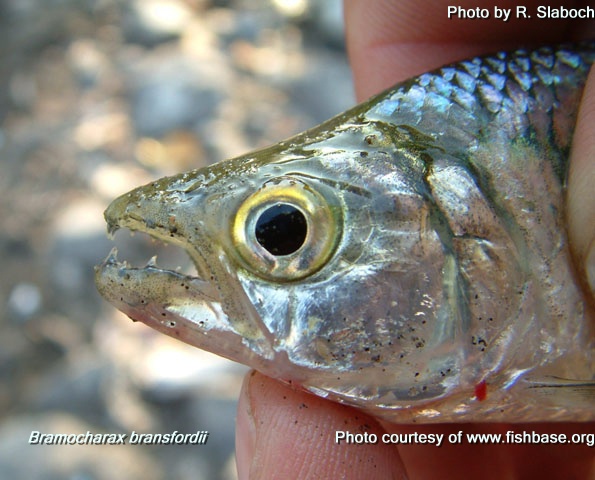 This page was originally created in 1995, since then two more new species have been discovered.

The other interesting physiological difference is that B. brandsfordi has two (2) canine teeth that overhang the lower jaw.

For more than half a century Bramocharax was known only from Nicaragua. Additional specimens were collected by Bussing in Costa Rica and recently reported (1967). The Guatemalan form is distinctly different from each of the more southern representatives of the genus. Of the southern populations, Bussing remarked that a faunal assemblage including Bramocharax probably had its origin in the great lakes of Nicaragua and ... seems to be moving southward along the broad lowlands of Atlantic Costa Rica.

B. baileyi is a slender bodied, long-snouted from of Bramocharax. The humeral spot is vertical, extending below lateral line.

USE YOUR BACKSPACE OR CLICK HERE TO RETURN OTHER PREDATORY FISHES