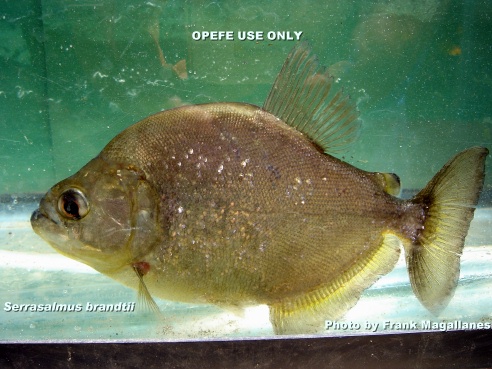 Historically, this is called the true pirambeba and is not consumed by Indians. The ęmicas explanations of this behavior are mainly based presence of many spines and little meat. The fishes aggressive behavior and the belief that pirambeba feed on human corpses, is taboo for humans to eat (Peixes e Pesca no Rio Săo Francisco) This species and Pygocentrus piraya are the only types of piranha found in the Rio Sao Francisco. There is little on record concerning it, but likely the first to be called a "pirambeba" since this name was used by early explorer's (Hart, 1870). The common name is controversial since it is not known where it came from. Myers, (1971) attempted to explain its origin by defining that it came from a corruption of the general language spoken in Brazil (*Patois). These two words pira = fish and peba = flat, were compounded from the Tupi language (see Myers, pg 26 ). Whatever the case may be, the common name for this species is herein accepted as accurate for this innocuous species. The species is a fin biter and should not be trusted with other kinds of piranhas and/or other fish. The fish probably grows to about 10 inches SL. This species coloration is variable as is the body shape, but those imported for the aquarium trade are with yellow fins, some body spotting and bright silver body coloration.

*Patois, although without a formal definition in linguistics, can be used to describe a language considered as nonstandard. Depending upon the instance, it can refer to jargon or slang, as well as to pidgins, creoles, and/or dialects. In many cases, class distinctions are drawn between those who speak patois and those who speak the standard or dominant language. en.wikipedia.org/wiki/Patois.

*Serrasalmus aff. brandtii and Pygocentrus nattereri are two species of piranhas, both common in the Viana Lake, which is formed by the flooding waters of the Pindaré River, a tributary of the left bank of the Mearim River. A sample composed of 249 specimens of these species was studied in order to identify diet composition and feeding strategies employed by the two species. The piranhas were captured tri-monthly, during one year from March 1999 using gill and fishing nets of different mesh sizes. The qualitative composition of the diet was analyzed through the frequency of occurrence method. The feeding strategies employed by the piranhas were inferred using the graphic method of Costello (1990), modified by Amundsen et al. (1996). The results indicated that fish was the main food item in the stomach contents of the two species, followed by plant material, more in the P. nattereri. Fish and plant material showed different relationships in relation to piranhas length classes. The graphic analysis of the feeding strategies employed by P nattereri and *S. aff. brandtii suggest a generalist habit, wide width niche with strong participation of the within-phenotype component, which indicated that the majority of individuals of these species use several resources simultaneously. A multivariate analysis of the ecomorphological index indicated that the species are discriminated by swimming ability, water column position and relative prey size.

TRUE PIRAMBEBA - Some hobbyists report keeping this species as a group. Juveniles in the wild  are found in abundant numbers together, however, that is fairly common with any juvenile species. In the aquarium, its unknown if these fish successfully kept together for any real length of time. Sooner or later they must be separated. Having kept 2 individuals together they fin bit each other and quarreled from time to time. The photo to the left illustrates this. After this photo was taken more severe biting took place and I separated the species. Plenty of food was available, but they preferred each others fins! Recommend keeping as solitary species in home aquarium. Readers may access test mixing of this species with genus Pygocentrus to see what results might take place should you try and attempt this.

Breeding S. brandtii has not been accomplished by hobbyists as of this writing. While their breeding habits might be similar to Serrasalmus maculatus or S. spilopleura, there are some things that need to be done in order to have the best suitable breeding environment.

Because they are a small species and prone to excessive aggressive behavior, it is my recommendation that an aquarium of at least 200 U.S. gallons be used to facilitate breeding.  I believe the greater accomplishment would be with a larger tank than my suggestion as this would give S. brandtii a much better chance to "feel at home." Water chemistry for the rio Sao Francisco (and depending where you are) is:  Temp; 21 - 24 C, pH; 6 - 7.8, Hardness up to 25 dGH. What I would also suggest is lowering the pH from the higher figure to about 6.0 and doing 30% water changes every three days, using pre-conditioned water that had been treated by adding a phosphoric acid at the rate of 5 milliliters per gallon. The reasoning behind this is because it is known that some hard to breed catfishes from this region were able to be achieve breeding behavior and clutches of eggs using this method after the 5th water change. While there is no guarantee this might help S. brandtii spawn, one never knows until all venues are examined. Peat filtration should be used in all cases. What might be of interest to readers is the natural pH value of Rio Sao Francisco can range anywhere from 4.8 to 7.8 and the areas where some S. brandtii are caught (rio das Velhas, a tributary of the rio Sao Francisco) pH can average 6.5 to 8.7! Many organisms cannot tolerate high levels of acidity, and even those who can, face the problems that their food sources (such as insects) cannot survive in highly acidic environments. As acidity in a water system increases, the number and diversity of organisms decreases. Also, at levels of pH 5, most fish eggs cannot hatch (see: Project Amazonas, Threats - Pollution). Both S. spilopleura and S. brandtii share a common egg trait in how the zygote is formed according to a current unpublished document (Godinho).

Getting back to breeding this species and its requirements, a biological filtration box (wet/dry system) should be used as majority of successful breeding of P. nattereri has been accomplished using this method. Add a couple air stones in each end of the tank. Lastly, go back and read information on S. maculatus and P. nattereri as the general rules for breeding would nearly apply here too. As a general rule, expect aggressive fin biting and/or mortality if you introduce same species.

Observations on the seasonal breeding biology and fine structure of the egg surface in the white piranha Serrasalmus brandtii from the Săo Francisco River basin, Brazil

In the Juramento Reservoir, south-eastern Brazil, the white piranha Serrasalmus brandtii showed a prolonged reproductive season, with evidence for multiple spawning and a reproductive peak associated with seasonal rains. The egg surface exhibited a honeycomb-like pore canal arrangement and an adhesive apparatus surrounding the micropyle. Electron microscopic analysis suggests a role for the micropyle cell and neighboring follicular cells in secretion of substances for egg attachment.

Depth of body 1 3/4 to twice in the length, length of head about 3. Upper profile distinctly concave above eyes. Snout rather acute, less than diameter of eye, which is 3 2/3 (yg.) to nearly 5 in length of head; interorbital width about 3 1/4. Second suborbital broad, nearly covering cheek in adults. Lower jaw projecting; 6 teeth on each pre-maxillary, 7 on each side of lower jaw; teeth in both jaws equal; each palatine with 6 or 7 sharp teeth. Ventral serrae 21-23+ 10-11. Dorsal II 13-15; origin about equidistant from eye and base of caudal; length of base about 3 in depth of body, 1 1/4 to 1 1/3 in distance from uppper caudal fulcra. PROC. ZOOL. SOC. - 1928, No. LIIII.

Body size sifts are related to diet according to a recent study by Oliveira, et al (2004). Gradual changes in food habits were noted as the species grew according to body size. Juveniles fed mostly on micro-crustaceans and insect larvae. Sub-adults ate insects, fish fins, fish scales, and chunks of fish flesh, in that predominate order of importance. The larger adults referred to as pirambeba, ate fish and was the food primarily eaten, followed by insects. 22 food items were identified with this species and included seeds, fragments of roots, stalks, and leaves. However, plant remains represented only a minor percentage of stomach content in all S. brandtii sizes.

For complete citation see REFERENCES below.

Number of specimens and sizes for the citation description: