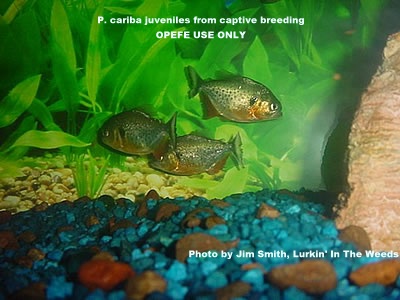 As told by Jim Smith of Lurkin' In the Weeds Pet Store, Michigan

When I first reported the home breeding of Pygocentrus cariba, the so-called hobbyists experts on piranha took great pains to tear apart and dismiss Jim Smith's accomplishment. Their argument centers on "if there are no pictures, then it didn't happen". Or we want solid "proof" from Jim or some most cases expecting me to present the documented proof as if I have a magic box.  Not everyone is on the internet to reveal secrets of breeding fish. Just because you have not read about it, doesn't make it not have happened in someone's aquarium. So I leave it to the majority of hobbyists that read this article to determine if the species was bred or not. As far as I am concerned, Jim is an honorable person and I trust his word over any skeptic or fly by night hobbyists that disputes the article. My writing this is in hopes that those that are serious about breeding piranha can take Jim's account and perhaps have similar successes. It is a starting point. Above is the only known photo of Jim's offspring from the successful breeding. Date of photo is unknown, but was sent to me sometime in circa 2002.

A few hobbyists have reportedly accomplished the breeding of Pygocentrus cariba. The requirements for breeding this species don’t differ much from Pygocentrus nattereri, with a few exceptions. The dry season and wet season need to be applied to this species, but in itself is not really necessary. Good conditions, feeding and care all play an important part than just simulating the seasons. The aquarium size for a sexually mature pair, should be at least a minimum of 55 gallons, heavily planted on one side, the other side bare. The potential breeders should be afforded privacy, so sides of the aquarium should be blocked to prevent the fish from seeing you and free of outside disturbances. Males become dark and the females (at least on reported spawning) are the aggressors. They do build a nest consisting of blowing out sand and/or laying eggs in roots of plants. The rio Orinoco rivers water chemistry is as follows; pH: 4.5-7 (6.0); 2-8 dH (6); 75-82°F (24-28°C). For breeding purposes, water temperature should be at the high-end (84F). The area also undergoes a period of a dry season from October - March. The rainy season runs from April - September. Many aquarists go to a lot of trouble to set up water chemistry and aquascaping to get their fish to spawn. The problem seems to be to get the fish in the mood and try to simulate (and stimulate) their spawning season. While it is true that most fish spawn seasonally, it is not necessarily because it is compulsory for them, only that the habitat regulates when they can. If the habitat allows continuous spawning, most commonly in hydroelectric reservoirs, then the fish will take advantage of that. An example is the Brazilian piranha Serrasalmus spilopleura (= S. maculatus), which changes its behavior to spawn continuously in reservoirs (Dale Speirs, California Academy of Sciences).

According to hobbyist and business owner, Jim Smith formerly of Lurking In The Weeds Pet Store in Michigan, who has successfully bred this species, he recommends keeping an air stone going on one side of the tank. This way when you simulate a dry season (for 1 week) you can turn off filters. Drop the water level down 20% of fill. Keep a close watch of weather patterns as Jim says these fish are effected by barometric pressure (some authorities dispute this), but I personally have seen a much greater degree of pre-breeding behavior at the start of rains here in Oregon. At the onset of the rainy season, raise the water level up again at fill. Restart the filter, use peat as this to will encourage fish to get into breeding behavior. For the wet season, water was raised at 1-degree temperature difference from the current water temperature. The fish react to changes in rainwater in the Amazon and helps make the breeding season begin. Jim stated that he had good success following this regimen even though it is time-consuming. The end results did bear fruit. Aquarist attempting this should remember, each circumstances are different. What worked for Jim may not work for you and there are many reason's for that.  Some hobbyist take the opinion all they have to do is simulate the conditions and their fish automatically will spawn. As discussed here and elsewhere in OPEFE, it takes more than that and certainly the fishes must be conditioned first. Without this key, then you are basically wasting your time. There is no magic formula, but common sense does help and knowing the fish and what their requirements are, helps tremendously in bringing a satisfactory result.

According to present scientific studies, the size at sexual maturity of P. cariba varied in connection with sex, 50% maturity occurred at 188 mm SL (7.402 in.) for females and 165 mm SL (6.496 in.) for males. Female and male P. cariba underwent annual gonadal maturation from January to April/May, and spawning or spermiation occurred between July and August (Guerrero HY, Caceres-Dittmar G, Marcano D.).