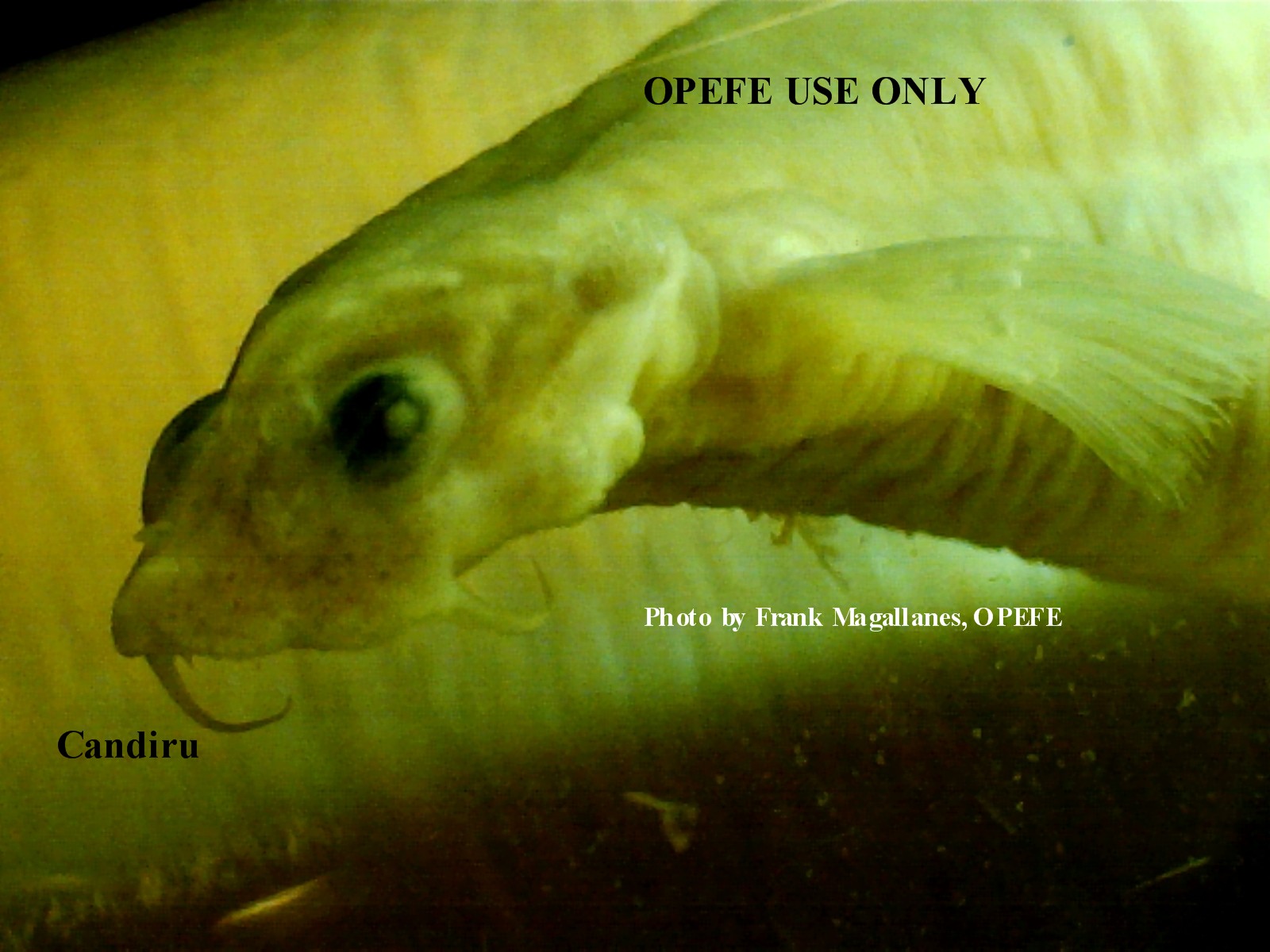 Trichomycterid was collected in a seine during a 1999 expedition by David M. Schleser and donated to OPEFE. The species was caught in a sand bar in the lower reaches of Orosa River. This is a few miles downstream from the small village of Suni Maranho, Department of Loreto, Peru.

The Candirú has few natural enemies. They are feared throughout their geographic range and are given a worse reputation than the piranha. It is found only in the Amazon and Orinoco Rivers of South America. They do not like the sunlight and tend to bury themselves in the sand and mud under logs and rocks in the river bottom.

WHAT THE SPECIES ACTUALLY FEEDING ON

While it is been written that this fish enters the urethra of human bathers (one article - Lins, Journal of Urology, 1945) claims a U.S. navy surgeon named Charles Ammerman operated on three Candirú victims, in one case slicing into the bladder to extract the fish.

Schultz (Piranhas - Fact and Fiction, 1964 and Myers, 1977 Piranha Book) related some interesting stories of this fish. One in particular having to do with Candirú being found in drowned bodies of mammals. Schultz states Candirú ...can hollow out the entire body and when these mammals are pulled to shore, the Candirú fall out!  He also related a local belief that ...Candirú would follow the stream of urine of a person standing on the banks of a stream, to get into the urinary tract!

Today it is factual and documented based on a recent report of a human having urinated while in the water and the Candirú entered through his penis opening (see below). The catfish had to be surgically removed at a hospital in Manaus. The Candirú is considered by some to be the only known vertebrate to parasitism human beings, however that is an erroneous postulation. Truth is the fish enters humans more by accident than design, fortunately it is rare occurrence they enter human bodies!

This little catfish has been known to enter the gills of fishes where its parasitic nature takes over by feeding on blood and bits of flesh. Such is the nature of this miniature beast---a vampire-like to say the least! A smaller Amazonian fish, dubbed the vampire catfish, was recently discovered in the Araguaia River of the Amazon Basin. These transparent little fish are shown in deeper detail (see Fink image above-left) entering the gills of a fish.

For the first time, this story which has been carried at www.opefe.com and shown on Animal Planet in 2006.

These photos are taken from Animal Planet and the above link.  For educational purposes only, the images are displayed here.

A more expensive option is the use of two plants, the Xagua plant (Genipa americana) and the Buitach apple which are inserted (or their extract in the case of tight spaces) into the affected area. These two plants together will kill and then dissolve the fish. More often, the pain causes shock and death in the victim before it can be removed (ref: Candirú From Wikipedia, the free encyclopedia).

A new book specifically on Candirú is published: Candirú: Life and Legend of the Bloodsucking Catfishes by Steve Spotte, Creative Arts Books, Berkeley, xi + 322 pp. is now available at Amazon.com; Of the many legends to emerge from the vast Amazon basin of South America, none is stranger than the story of the Candirú. This sinuous little catfish is said to force its way into the urogenital openings of unsuspecting bathers, causing excruciating pain and even death. Stephen Spotte spent four years investigating the biology of these near-mythical creatures and the reports of their attacks on humans, starting with accounts of early European explorers. His tale is an intricate, compelling mosaic of science and lore. Are the legends true? Read Candirú and find out. It contains everything you ever wanted to know about Candirú but didn't care enough to ask.  Lots of new material on Candirú and cool illustrations, including some SEMs of the dentition. Bio: STEPHEN SPOTTE is a marine biologist at Mote Marine Laboratory in Sarasota, Florida. He was formerly a research scientist at the University of Connecticut. He has a Ph.D. from the University of Southern Mississippi.