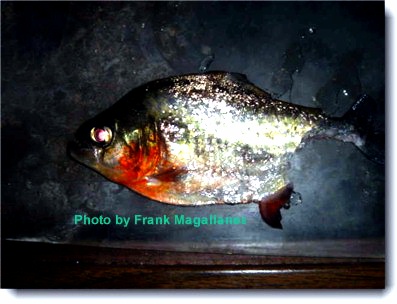 Cohabitation: Does the term fit a piranha tank?

An example at the top left, on what can happen when two (2) of the same species are mixed together in large aquarium (55g). Only 1 remains alive while the other is partially eaten. There will always be hobbyist's that will advise others to keep experimenting with their fishes in the hopes that somehow the nature of the beast will be changed. Fishes are not like that, any more than other wild animals are. Yet, one can find many such internet forums where the practice of cohabitation or shoaling is still being tested and encouraged. To the hobbyist that is unaware of what the nature of the piranha is, it can be a very costly mistake not just for the hobbyist but the animal itself! After 40 plus years in this hobby of keeping piranhas, I still hear that folks want to try and make their home the Amazon river without taking into consideration that these fish are predators of each other and their tank mates!

If you are a frequent visitor or member of a piranha forum on the internet, you have probably heard it before i.e., my piranhas are cohabitating together in a fish aquarium. Are they really? What is the definition of cohabitation? And how does it apply with piranhas? In order to answer this question we have to explore what cohabitation means. You can access the internet dictionary and find some examples. For now, here is the web dictionary definition of cohabitation:

What is the legal definition of cohabitate?

So it stands; the term cohabitation finds its way largely in defining  people with people.

What about fish? How does cohabitation fit in?  Here are some short examples:

In the above examples, cohabitation means; being or living together. So in this sense, cohabitation is a loose word being applied to a specific circumstance. Are fish living with plants cohabitating? If one does a search on Google, using the term fish cohabitation, it is used as a loose term. Many of the reports spell out problems with cohabitating certain species or diseases/parasite transference. Below are examples of fishes that were so-called cohabitating:

This Pygocentrus piraya was kept as a pair in a 55g aquarium. Both were well fed, then one day the smaller one decided it no longer wanted a tank mate and began to eat its larger neighbor. It became a rather expensive meal! There will always be an elite few that will try disprove the nature of the beast only to find out the beast thanks them for the meal.

How does all of this apply to piranhas and pirambebas?

Consider the above photos.  According to Stauffacher, M. (1994). A prerequisite for successful cohabitation is that the restrictive artificial environment should be structured in such a way that animals are able to avoid contact with each other or initiate new contacts according to circumstances."What this means is; if you wish to put two different species of piranhas together then you must either put a divider between them or find a way to successfully keep them from damaging or killing each other in the container or habitat. Using the lion and human in a cage scenario. The question begs are they cohabitating? The answer with a question would be, what is the human doing? hiding? or looking for a way out? or is he looking at the lion as a potential mate? And what is the lion doing? licking his chops for a next meal (i.e.; at the human) or just licking the human's leg in loving way. It now rests on what the reality of the situation. Piranhas are not tame by nature, nor is a lion. They are both predators and so is man. The big difference is, man is not equipped to kill and eat a lion with his bare hands and teeth. A lion (and a piranha) can and will if the opportunity is there. So can you cohabitate different piranha species? Sure, but the results will be less than friendly. So the word now means something else. Using that term cohabitate is erroneous in defining placing opposite species in a tank. Because, when it is used literally, it conjures up images of friendly play. Or to put it more directly cohabitating neon's with glow-light tetras. Put an angelfish (Cichlid) in there and you will quickly find out why cohabitating is not the proper terminology.

To the angelfish, cohabitating with a smaller species means lunch.  The idea that piranhas cohabitate in an aquarium with other fishes without being eaten is well, short sighted, bordering on ignorance of the species. As stated above, does a piranha cohabitate with a plant? Of course, but it also eats it as well.

According to a well respected authority and expert, cohabitation is a stupid word to use when it comes to piranhas....And I agree with him.