Cold Tolerance of Pygocentrus in the United States 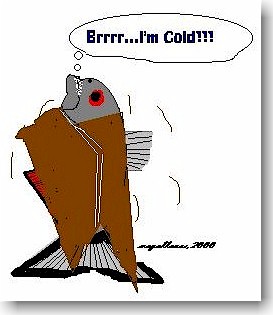 The American Fisheries Society published a monthly article called TRANSACTIONS of the American Fisheries Society. Volume 126:84-849, dated September 1997 is the article I will be discussing here. What I finding interesting is this report states that piranhas are found in Southern Argentina. Southern Argentina is Patagonia, and there are no living serrasalmin in that area. Piranhas (presumably S. spilopleura) are found in southern Brazil at the border with Argentina in the Uruguay drainage. There are no records for Pygocentrus that far south in Argentina. The Uruguay is a very large river and according to a person who grew up in that locality, that river has never gotten close enough to freeze. S. spilopleura is the only one that has been collected routinely as far south as Buenos Aires.

As we all know piranhas and their close relatives, the pacu have been released accidentally and mostly intentionally in United States waters. This has led many individual States to prohibit possession or selling of piranhas. The principal piranha this research paper focused on was primarily Pygocentrus nattereri and a cursory mention of Serrasalmus rhombeus. The paper itself is loaded with the typical piranha mélange of horror stories including references to testimony by Dr. Herbert R. Axelrod who testified before the Superior Court of the State of California for the County of Los Angeles in 1965. Part of the Reporters transcripts  (SOC 10624, pages 15-24) is quoted as saying that Axelrod reported collecting piranhas from ice-covered lakes in nature. The report also included research by St. Amant, 1967 which held that...."Field observations showed that red-bellied piranhas in southeast Argentina periodically encounter freezing temperatures with no apparent mortality."

The researchers in order to test the theory of cold tolerance for genus Pygocentrus, purchased several juvenile piranhas of approximately 2.5 cm. This was divided up in groups of 10 and one group of 20. The research workers selected January as the coldest time of the year in the United States, using mean air as the data that was the most predicable. The temperature used was from a 30 year period of 1961-1990 as determined by the National Oceanic and Atmospheric Administration (NOAA).

The fish acclimated to 35°C were frequently more active and aggressive with increasing water temperature. The piranhas engaged in fin biting and body bites. At around 25°C and 35°C one fish each from the group was cannibalized. Fish acclimated at 20.5°C stayed active but tolerated their tank mates better. At 15°C, the fish stayed within tight schools and their behavior changed dramatically. Below 10.2°C, the fish began to lose equilibrium, and at 10.0°C, approximately half of the fish, though still alive were lying on the bottom of the tank. The last fish in this group displayed LOE at 9.7°C. Feeding behavior was also influenced by temperature in which they were acclimated. Between 14°C - 35°C red-bellied piranhas successfully pursued and consumed live goldfish. When the temperature was decreased to less than 14°C, piranhas in the 10°C group appeared lethargic and were unable to catch the more cold-tolerant goldfish. However, these piranhas still accept adult Artemia until temperatures decreased to less than 12°C. Though it was not determined how much the fish ate, they seemed to hold at temperatures of 15°C or 20.5°C consumed less food than piranhas kept at higher temperatures.

The research group was able to establish a zone of cold tolerance for genus Pygocentrus using the data listed above and other research material not covered here. The lethal zone included regions where temperatures fall below the fish's chronic thermal minimum (10°C); red-bellied piranhas would not over winter in this zone. Temperatures of 10-12°C characterized by a transient zone wherein introduced fish could over-winter in some years, but yearly temperature deviations make it unlikely that these fish would establish permanent populations. Areas where mean January water temperatures are between  12°C - 14°C constituted a transitional zone in which feeding behavior responses may be more important in determining over-wintering potential than temperature tolerance limitations. Hawaii and southern regions of California, Florida, and Texas, where January winter temperatures remain at or exceed 14°C, are within a zone of persistence. Low temperatures alone should not effect feeding behavior, physiology, or persistence of red-bellied piranhas introduced within this zone.

St. Amant (1967) suggested that piranhas could reproduce rapidly in the areas of the United States, including Alaska even to the point of devastating local fishes within a single year. This research disproves the theory and the possibility is remote, especially in northern states where growing seasons are short. The researchers held the belief that risks to fish assemblages from direct predation by red-bellied piranhas are very low within the predicted lethal zone.

Introductions of exotic pathogens would still be possible, but the risks involved should be of no greater from released piranhas than from releases of other exotic fishes. Presently, research is being conducted pertaining to host specific parasites of piranhas. Those certainly would not transfect native fishes. Red-bellied piranhas may temporarily colonize parts of southern Alabama, Georgia, Louisiana, and Mississippi, cyclic recurrence of lethal low temperatures could become established in these states. But severe winter temperatures would fall to lethal levels, therefore possibly preventing population growth. Even in Arizona, California, Florida, and Texas, where thermal temperatures are more conducive to red-bellied piranha establishment, the fish's northern distribution extremes could be expected to show considerable year-to-year variation. In those States, piranha populations could be persistent where water temperature falls between 12°C - 14°C even though the experiments showed they were unable to capture goldfish, they did indeed shift their diet to Artemia successfully until the temperature dropped below 12°C. A Miami, Florida case involved the red-eyed piranha (Serrasalmus rhombeus) which was populating a man-made closed (over 1,000g) pond which persisted for more than 13 years until discovered and eradicated by wildlife officials in 1977. This fish was initially reported erroneously as S. humeralis.

Field observations of red-bellied piranhas showed that fish inhabiting cooler regions of South America may have evolved greater tolerance to low temperature than have their equatorial con-specifics (Moe 1964; St. Amant 1967). However, the CTMin (ranging from 10.5°C - 19.7°C; could not be compared with those of other red-bellied piranha populations because these estimates are not available for other populations or any other piranha species. Braga (1975) reported that red-bellied piranhas captured near equatorial Brazil died at temperatures between 12.4°C and 13.4°C when exposed to temperature decreases of 1°C/d. This value is considerably higher than the chronic thermal minimum (10°C) based on equilibrium loss. Likewise, red-bellied piranhas in Foxx and Martin's (1970) experiment stopped consuming live fish at nearly 2°C higher than piranhas used in this study. What this suggests is genetic differences between populations may play an important role in defining over-wintering range of red-bellied piranhas released in the USA. OPEFE agrees completely that establishment of piranhas in the USA would be undesirable. Hobbyists, ultimately have the responsibility to ensure their fish are not released in U.S. waters, and that piranhas be disposed of humanely.