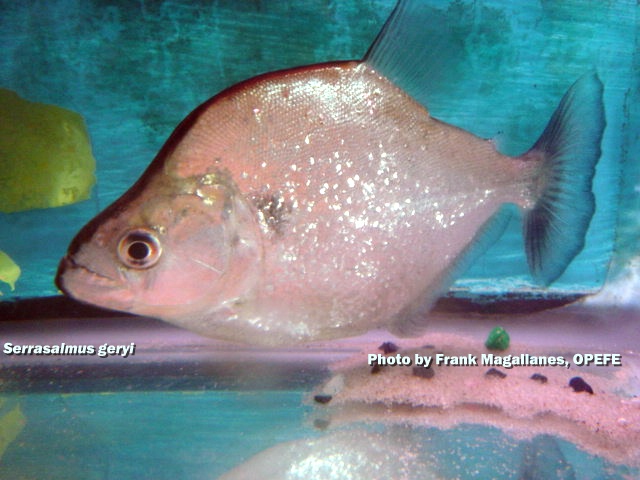 Serrasalmus species should be continued to be maintained as a single solitary species in the home aquarium. There continues to be qualified doubt as to the validity of statements that these fish can  group together peacefully. I've never understood how the term peacefully would apply to piranhas. Could be wishful thinking. Any fish can be kept together, for how long remains anybodies guess when it comes to piranhas! But I remain convinced that keeping various species of Serrasalmus species together, to include same species, is a not a good idea because of the potential of serious injuries to the fish. Fin biting while it may seem harmless because the fin regenerates, can lead to other more serious injuries if the bite goes into the flesh from repeated attacks of the fin. You must remember your home aquarium is a box, not a river where the fish has no place to swim away from injury. Hobbyist must always be cautious when attempting these group tests. It may not always be successful and no long term success (ie; number of years) has been reported as of this date.

This species is often referred to as a violet line piranha by hobbyists because of its prominent racing stripe from lower edge of snout to top of body. It makes this Serrasalmus species one of the most unique and interesting pirambeba species known to man. Certainly worth keeping, if not for its beauty but rarity in nature. I give it high marks as an interesting topic species and conversation piece.

Below are statements by Jeff Concannon a piranha-fury member and his view on the topic.

THE FOLLOWING IS INFORMATION IS PROVIDED BY JEFF CONCANNON. OPEFE DOES NOT AGREE OR DISAGREE AND HOBBYISTS ARE STILL CAUTIONED ABOUT ATTEMPTING THIS TYPE OF SPECIES AQUARIUM

I had to do some separating when I was dealing with one particularly large S. geryi that had been solo in the hobby for a long time. He didn't get along with any of the fish I tried with him. Then, when I got in three 4 inch fish, had one 8 inch S. geryi at the time and although I never had to separate them, I decided to get some more small ones then having such a size disparity in the tank. I only had to separate one fish from that group of 5 because he got bit on the eye and I wanted to heal him up. The only casualties I had with S. geryi was loosing 2 when I moved back to Oregon and had to have them shipped. I ended up with 3 of my 5 making the trip alive. I haven't had an issue since adding the 4 to my original 3...other then the usual fights for territory you would get with any Pygocentrus tank...although the bites are usually to the body and not the fins. They do tend to strip some scales making it look worse then it is. (CONCANNON, 2006).

Field reports suggest the species travels in small groups (20-25 same sized individuals), however recent investigations into this matter is still unresolved by science.  Reportedly the species is being kept in small groups in the home aquarium. However it is advisable to keep as individuals instead of such groups. Piranhas as a whole are unpredictable. So what might work in one tank may not work in yours. I presently keep this species in my home as a solitary specimen and they certainly are unique appearing. Dr. Michel J?gu, Geraldo M. dos Santos discovered this species. S. geryi is dedicated to the French ichthyologist Dr.  Jacques G?ry for the significant work which he contributed in the family of the Serrasalmidae and more particularly in the genus Serrasalmus. The fish is distinctive at all ages with its broad stripe (reminds one of a racing stripe) that runs from the lower mandible to the upper part of the dorsum right to the dorsal fin. I'm not really sure how big it grows. Most of the one's I have seen average 9 inches SL, so they might be just under a foot long. They are very laterally compressed and are members of the compressus-group of piranhas.

Recently (2000), OPEFE received some information from George Sheh, states that these fish are able to group together with minimal fin-biting and provided a photo (not shown) of his 15 specimens. These were raised together in a 125 gallon aquarium, the largest being over 10 inches total length (George Sheh passed away in October 2006). Since then, Jeff Concannon of Portland, Oregon has been keeping several individuals of S. geryi in his large home aquarium (2005). Concannon experience with S geryi is considered one of the best in the home aquarium.

All teeth pictures provided by and owned by Vikrant Mistry.

Various hobbyists are attempting to breed S. geryi. As of this date, there have been a few unconfirmed captive breeding programs (1 in Singapore and the other in Ohio). Below is some information that may be of use. Hobbyists are reminded these general parameters for the native ecology of the fish. It remains my assumption that the fish will breed in any water condition that is clean.

These fish are found in areas where Dams have been build and their ecology has been changed by man. The water chemistry which is the most important part of any attempts to breed fish is as follow: Rio Araguaia: pH 5.8-7.5 (6.5), 4-20 dH (8), 72-82?F (22-28?C). Early dry season pH would be 7.0 (6.7-7.3), the late dry season 6.9 (6.6-7.0). Temperature during the early dry season (29.0 C (27.8-30.2) and the late dry season 28.2 C (27.0-29.2). (Tejerina-Garro, et al). S. geryi was described from the Rio Tocantins which is clear water. Clear water rivers have a pH of 6.9-7.5, and a water hardness of 5-12 dH (Rio Xingu would also be in this category).  Requirements include a sandy to loamy bottom with some vegetation to keep the species comfortable and bright light. In most cases it is better to simulate the dry and rainy season. This  cycling can  take up to three (3) to four (4) weeks to go through. Many successful spawns of other piranha species have occurred following this type of program. The changes in barometric pressure can also facilitate spawning (during our rainy season). During the dry season you can drop the water levels and allow periods of "starvation" for a short period of time. While this may seem difficult to do with any piranha species, you can condition them by slowing decreasing the amount of food. Then provide large variety and quantity during the rainy season. The entire idea is to make it as much a natural environment in a captive situation. I also recommend covering the tank sides, front and back with paper so that the pair (or pairs) are not disturbed. Like the majority of piranha species, S. geryi is not sexually dimorphic. It is presently unknown what size tank to use for breeding this species. Being that they are an average sized piranha (about 10 inches TL), it is my opinion until changed that a suitable tank would be at least 200 U.S. gallons for one (1) potential pair of breeding S. geryi. My general rule is; bigger is better! So keep this in mind when you contemplate breeding this species. Characiformes usually are visually-oriented diurnal fishes with large eyes; they dwell in well-lit surface waters (Lowe-McConnell 1975, Fink & Fink 1979, Moyle & Cech 1996). In contrast, catfishes are primarily nocturnal and have sensory adaptations (e.g. tactile and chemical receptors) to low visibility (Hara 1971, Lowe-McConnell 1975, Fink & Fink 1979).

WHAT'S IN THE RIVER?

Sedimentary rocks contribute with a very high concentration of suspended matter and, therefore confer high turbidity on the Tocantins river water. The soils are composed mainly of yellow red, pod sols, latosols red yellow and yellow latosols of low fertility and high acidity. There are no floodplains in the high and middle Tocantins River therefore, the tributaries are important contributors of organic matter, and are regions of nursery grounds for fish fauna. The Rio Tocantins has a high discharge (December to May) and low discharge periods (August to October). S. geryi frequents deep water and nests near the shallows as in the majority of piranha species.

Copyright? 1994-2009 Oregon Piranha Exotic Fish Exhibit (The OPEFE fish exhibit is permanently CLOSED as of 2000) Sutherlin, Oregon. Information posted on this web site is archival data on fish scientific classifications and other information. DISCLAIMER: The copyrighted material may not be used for any purpose other than private study, scholarship or research. Cited information requires credit and this link www.opefe.com. All rights reserved. All images shown  (unless otherwise noted) is property of OPEFE.