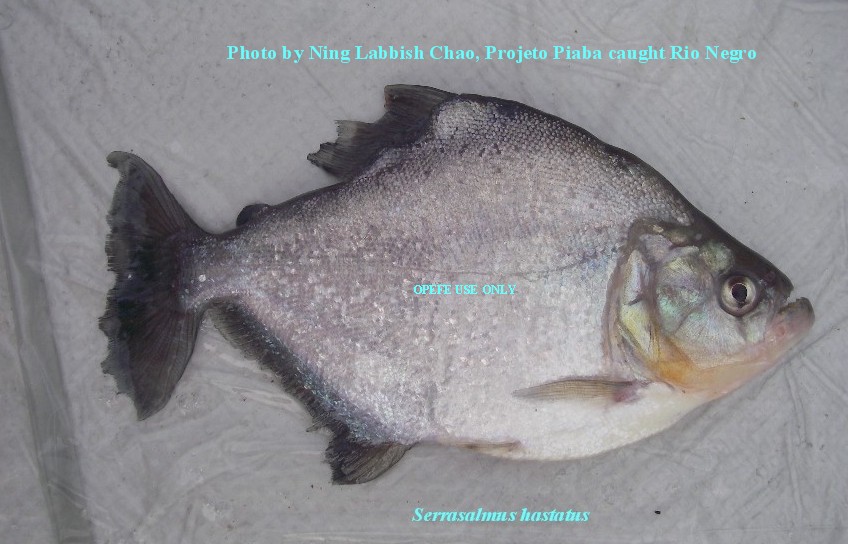 ETYMOLOGY: The name is derived from the Latin, hastatus, spear-shaped, referring to the pointed and highly compressed snout. (FINK,  MACHADO-ALLISON, 2001)

Recommend keeping as solitary species in home aquarium. Presently no information on care in the aquarium. It can be assumed the species behavior is probably the same as S. altuvei and S. compressus. Very likely a fin biter. I will attempt to collect more data as the fish becomes more available. S. hastatus (left) photo courtesy of Dr. William L. Fink. Serrasalmus hastatus is a new species of piranhas from Brazil. It is highly compressed, deep bodied fish and described from the Rio Branco and Rio Negro of Brazil. It also resembles several species of deep bodied, compressed Serrasalmus that have dorsoventrally elongate belly serrae (Fink and Machado-Allison 2001). These species include S. altispinis, S. altuvei, S. compressus, and S. geryi.  M. Jegu sent me this paper and drawing of his Serrasalmus compressus, une espece nouvelle (1991). While reading the article, I noticed that the description and the drawing (seen below) didn't seem to match. I contacted Dr. William L. Fink (University of Michigan). He had no seen the paper. I told him, based on what I was seeing of the drawing it appeared odd. Not like Rameriz, 1965 of S. altuvei. FInk said that he thought I might have something there. Long story short, S. altuvei drawing was in error. The species is not found in rio Negro has described by Jegu. Both Fink and Machado-Allison were able to erect a new species S. hastatus from the Jegu misidentification.

The species differs from these species in having a much straighter dorsal head profile and in having thin, vertically elongate spots and stripes (Fink and Machado-Allison, 2001).  The other species listed above have much more rounded spots on the body. Also, this species does not have distinct stripe along the head, under the mouth  to the top of the dorsal fin, like S. geryi. There is overlap with S. compressus in terms of the distance of the head to the top of the dorsal profile. The jaw and gill area where it is joined, is shorter distance where the pectoral fin inserts which helps distinguish this species from S. compressus and S. altuvei. Large adults of S. altuvei sometimes show fainted spots forming short vertical stripes, but they are shorter and much less numerous than the vertical stripes of S. hastatus.

The entire body is bright silver, with bluish overtones. The eye is bluish silver, with darker grey-blue pigments dorsal and ventral to the pupil. The vertical fins are hyaline, but with pigment.

Described from the lower Rio Negro drainage, Both the Marara beach and Maguari flooded forest, from the mouth of the Rio Branco, Rio Uraricoera, Rio Solimoes near Manaus. Distribution; Rio Negro, basin. Brazil.