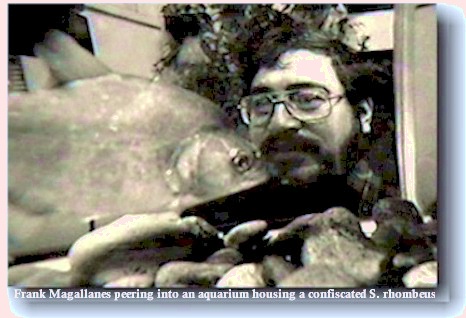 [The photo was taken at the Oregon State Police office in Roseburg. ]

The image above was taken by a DOUGLAS COUNTY NEWS-REVIEW photographer for the local newspaper. It was taken just a few weeks before the trial in District Court. The image made the front page and The Associated Press.

In this particular court case, we (Charles Lee and myself), did some research into the phrase; commonly known as. Mr. Lee found an historic legal document (People vs. Hines, 6.N.Y.S.34-11. Criminal law, 304(21) ), in a court case where the State of New York was a plaintiff against the gambler and defendant Dutch Shultz. In this finding, the court said; "The use of expressions "commonly known as" or "commonly called, " in statute referring to what was the commonly called "policy," did not require court to take judicial notice of nature of game of "policy" referred to in statute, since expressions referred to common knowledge of those connected with commission or prosecution of offense. Penal Law § 974. This simple paragraph and the The Piranha Book by G. S. Myers (1972) opened the door to allow possession of pirambeba (or those outside of genus Pygocentrus) in Oregon. Further, the court action would later inspire me to seek a blanket removal of the entire genera of piranhas from further restrictions and possession in Oregon (SEE Oregon Law).

ORDER FOR RETURN
OF THINGS SEIZED
AND FOR FORFEITURE

THIS MATTER CAME BEFORE the court on the motion of Defendant for the return of things seized on January 15, 1993. The matter was heard on April 30, 1993. The Defendant was present in person with his attorney, Charles Lee, and the State was represented by Deputy District Attorney David Montgomery.

The court heard testimony of witnesses and received exhibits, and heard the argument of counsel and

FINDING ITSELF FULLY INFORMED, the court makes the following findings of fact and conclusions of law:

NOW, THEREFORE, IT IS HEREBY ORDERED that:

USE THIS LINK TO RETURN LAWS AND PIRANHAS