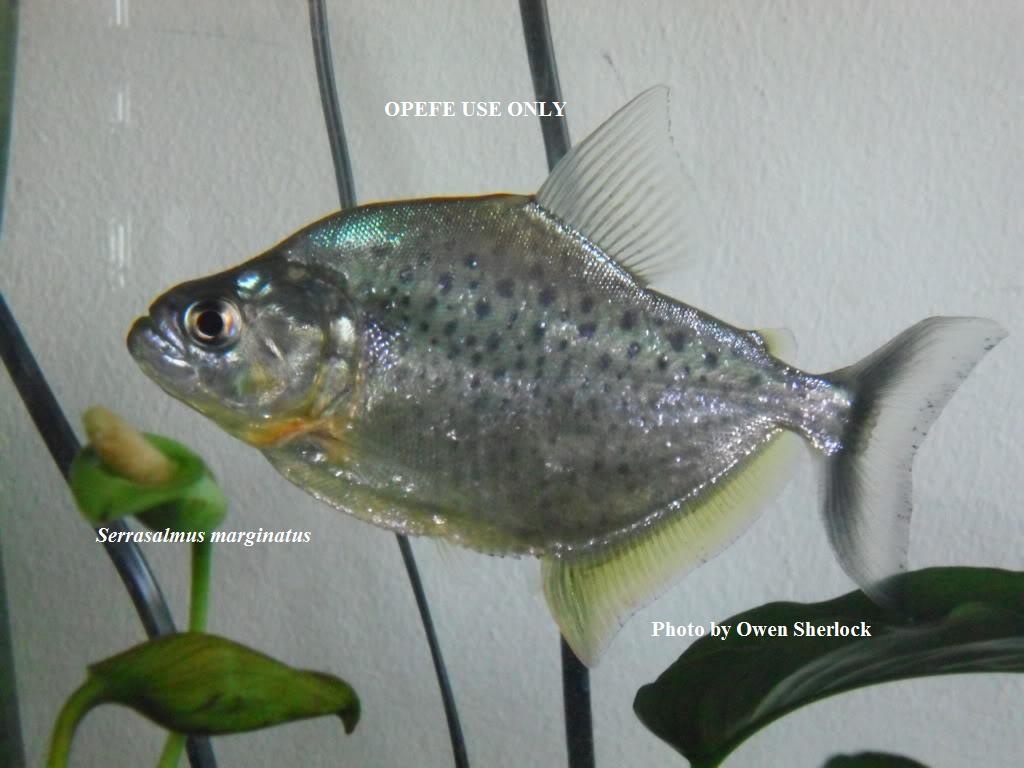 PIRAMBEBA -  Cautionary statement; some aquarists report keeping this fish as a group, however long term results are sketchy. The fish are rarely imported for the aquarium trade. Often times, the species is confused for S. irritans.  The species is a fin biter. Recommend keeping as solitary species in home aquarium.

The piranha, Serrasalmus marginatus is an abundant fish in the floodplains of the upper Parańa river. The stomach content were studied of juvenile and adult piranhas over a year and food items were determined. Fragments of fish were the main diet components with age-dependent differences. There was no seasonal variation in the prey. This piranha is basically a diurnal predator with some differences in daily periods of feeding activity between juveniles and adults. Morphologically speaking, both S. spilopleura and S. marginatus are similar appearing species, particularly in larvae stage. Phylogenetic speaking, they are related.  Strauss & Fuiman (1985) attribute morphological similarities in the adults - especially of species occupying similar habitat - to different, but convergent patterns of development. Stomach Content of Juvenile and Adult Piranhas (Serrasalmus marginatus) in the Parańa Floodplains, Brazil.

This species was described by Valenciennes (1836) using descriptive methods for the time period....

Eigenmann (1915) reviewed the type and the description. Eigenmann commented as follows:

"These specimens are all young and the identification is more or less doubtful. They may be the young of humeralis in which the terminal caudal bar has not yet developed. They differ otherwise from young humeralis in having the opercle dark below its middle.

"Depth of body 1 3/4 to 2 1/10  in the length, length of head about 3. Upper profile markedly concave above eyes. Snout rather acute, equal to diameter of eye (in adults), which is 4 to 5 3/6 in length of head; interorbital width 3 1/6 to 3 1/3. Second orbital  broad, almost entirely covering cheek in adults. Lower jaw projecting; 6 teeth on each premaxillary, 7 on each side of lower jaw; teeth of lower jaw somewhat larger than upper; palatines with with 7 or 8 small teeth. Ventral serrae 20-23+9-10. Dorsal II 13-15; origin about equidistant from middle of eye and base of caudal; length of base nearly 3 times in depth of body, 1 1/4 to 1 2/5 in distance from upper caudal fulcra. Adipose fin not rayed, base 5 1/4 to 6 1/2, its distance from rayed dorsal 1 1/4 to 1 1/3 in base of that fin. Anal III 29-34; margin very little falcate; length of base 1 1 /2 to 1 2/3 in depth of body. Pectoral with 13-16 rays, length 1 1/2 to 1 2/3 in head. Origin of pelvic nearer last anal ray that ip of lower jaw. Upper parts of sides with round dark spots in the young, generally persisting but becoming less distinct in adults; edge of rayed dorsal fin dusky; basal part and posterior margin of caudal fin dark. Very close to S. rhombeus, differing chiefly  in the narrower interorbital width and in the (generally) more concave upper profile of head. "

The description below is based on current scientific literature and revisions. S. marginatus is considered distinctive and not a subspecies of S. rhombeus. Considered valid as S. marginatus (Gómez, S. E. and J. C. Chebez, 1996).The body pattern spotting is composed of small spots and ovals unlike S. altuvei which has spots and elongated bars. Caudal fin forms a dark "V", terminal band is hyaline to dusky with adult. This fish may be a member of the "compressus-group" and is quite close in appearance to these group members.

The 26.6 mm SL, Juvenile is morphologically similar to the adult. The pectoral-fin rays are formed (12 rays), and the adipose fin is well developed. There are small teeth on the upper and lower jaws and the head presents a concave dorsal profile. The body is strongly compressed; there is a serrated keel (with 33 spines) along the abdomen. The pigmentation increases and melanophores form well-defined patches on the dorso-lateral region. (Cavicchioli, M; Nakatani, K; Shibatta, OA,1997).

In the caudal region, the pigmentation is intense, and there is a dark streak at the base of the caudal fin ("V"), extending over the superior and inferior portions of the lobes. Remainder of caudal fin is dusky in adults.

An interesting relationship between Pygocentrus nattereri and Serrasalmus marginatus has developed. S. marginatus has been seen taking crustacean parasites off the bodies of P. nattereri. (Sazima and Machado 1990). Feeds mainly during the daytime, though some large fish (15-20 cm SL) extend their foraging activity to dusk (about 1800-1900H). Night is spent sheltered among vegetation. Small to medium-sized fish (7-10 cm) are solitary and patrol feeding territories (3-4 sq. m.) in a way similar to that reported for the scale-eating Catoprion mento. Stalking with some use of plant cover is a frequent mode of hunting employed by S. marginatus. It approaches its prey with a slow, stealthy movement from behind or below. It strikes its prey on the tail or anal fin, of which a piece is clipped out with a jerking motion of the body. This clipping is audible underwater. Lurking is also employed during daytime (Sazima, I. and F. A. Machado, 1990).

This species tend to compete for nesting areas in its natural habitat.

Fact is, S. marginatus is a solitary species, with parental care, and which establishes feeding territories (Sazima & Machado, 1990; Agostinho et al., 2000) makes the space available for reproduction and feeding the most relevant ecological factor for the execution of these activities (in the wild).

Regarding the aquarium it should be a deep a tank as possible, more than length, a commercial breeder vat would be the best overall more than a standard tank (over 300g). The reproductive season for S. marginatus extends from September through January. It was also noted that S. marginatus has a high reproductive activity from intense to very intense in lagoons and water channels, in particular rivers water. So if the hobbyists employs the deeper vat type tank a strong flow is recommended. A sandy bottom with plants (rooted) is best, perhaps visiting your local pet store or special order a native plant found in nesting areas of S. marginatus would be appropriate (Nytella sp., a microphyte) or artificial nesting material similar to that. The average length in which all the individuals are capable of reproducing is 150mm SL; 5.906 inches SL (females) and 170mm SL; 6.693 inches SL (males). Size measurements of maturation conform to those of S. spilopleura. S. marginatus, like most of the other Serrasalmus species, including spilopleura are ambush predators. They prefer to hunt and feed in small areas (S. marginatus territory is approximately 13 square feet), this area would also include the breeding ground. In comparison, P. nattereri hunts, feeds, in an area several miles from the breeding ground. Yet, P. nattereri has been bred in small aquariums (55 gallons). Hobbyists are reminded that breeding any species of Serrasalmus sp. is risky but not always impossible, as evidenced by breeding of S. spilopleura, S. maculatus, S. rhombeus (this latter one was bred in a minimum tank of 900 U.S. gallons in a public aquarium). S. rhombeus requirements (see S. rhombeus breeding) are more needy because it is a large species (over 14 inches).