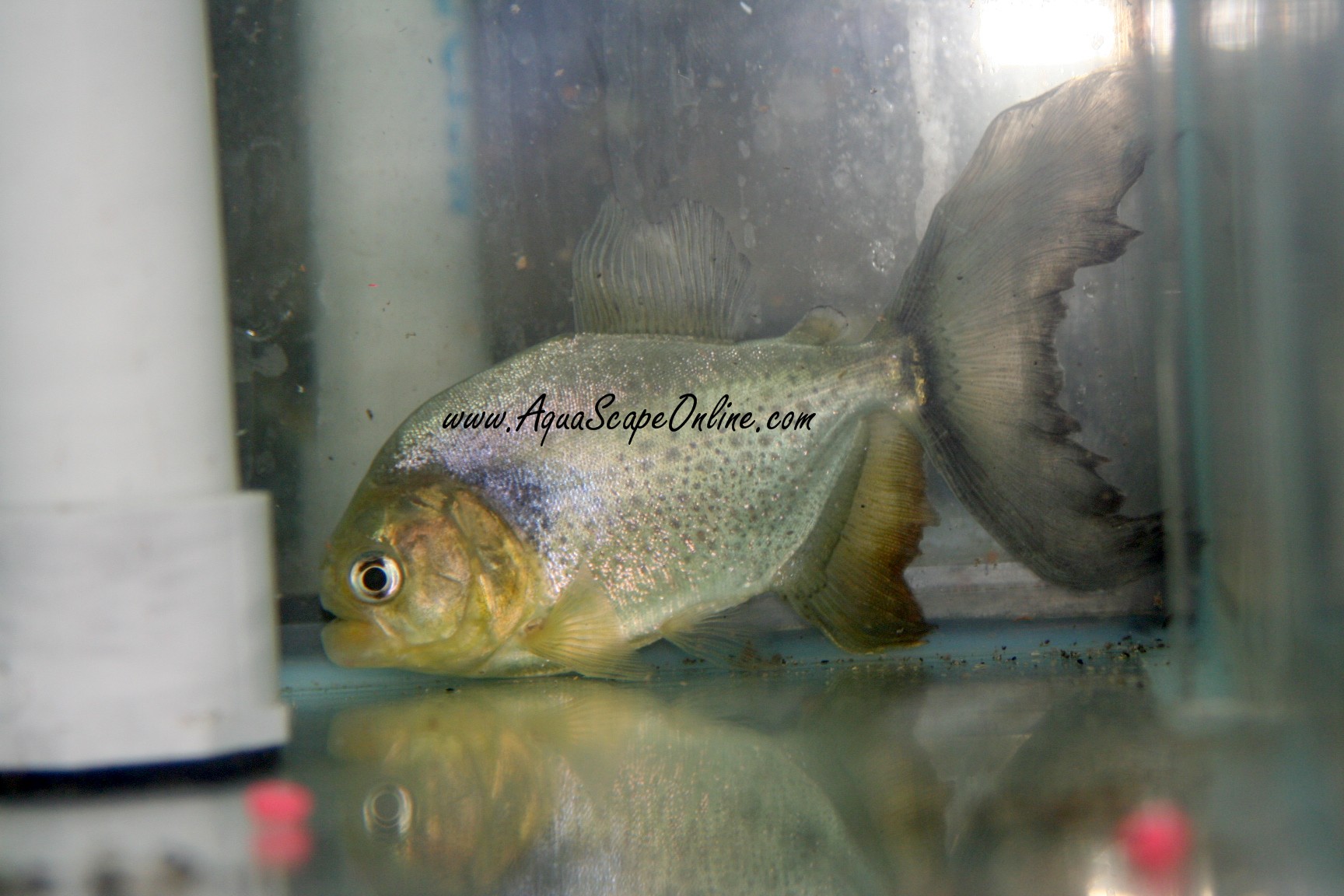 Sometimes, piranhas inbreed so much that deformities can occur. This type of "difference" in appearance can lead to the school eliminating them. This process is called "NATURAL SELECTION." If you have a small school of piranha (more than 2), you will see how they single out certain individuals from the school based on 1) size, 2) spotting, 3) and/or lack of social behavior. According to Catharine A. Toft (University of California) an example is used of too much inbreeding of a cichlid species (Papiliochromis ramirezi) to emphasize that species lost their original brilliant coloration after many generations of captivity. There are other examples, but scientists are divided on how many problems inbreeding does cause. It is my opinion (without actual proof) that the species S. ternetzi (Steindachner 1908) might have been described from a fish similar to this one below. We will never know for sure, however it might be plausible to assert that certain populations of piranhas over generations of breeding could create a population of species with unique genetic traits passed on such as those found in the Paraguay region ie; head shape, body shape etc. But since these traits are widespread among populations of P. nattereri, it does give one a reason to think and explore if that might be the reason why some piranhas have much more unique traits than other without diminishing the scientific placement.

Variance in body shapes can be seen in the smallest juvenile piranhas if you know what to look for. The same ontogeny can be seen even in wild piranhas giving them variety of shapes (head and body, lack of spotting). The photo to the far right is group of juvenile piranhas feeding on a piece of fish. Generally speaking populations remove the unfit and any piranha that appears "different" to the group.

The images above and below are of the same fish during ontogeny (growth development).

Still alive and doing nicely photo of the bent-nosed piranha featured above. The fish has not grown nor changed in appearance. The fish is about 4 1/2 inches TL and seems that will be the fishes permanent size. The fish is living in a 40 gallon aquarium all by itself. The fishes odd shape is much more disc-like than the common P. nattereri. This body deformity makes the fish body shape appear distorted on these images.

An interesting relationship between Pygocentrus nattereri and Serrasalmus marginatus has developed. S. marginatus has been seen taking crustacean parasites off the bodies of P. nattereri. (Sazima and Machado 1990).

These bulldog faced fish are the most common piranha offered for sale in pet stores and its legendary reputation as a man-eater has been grossly exaggerated by the news media, conservationists and some writers of serious scientific journals. When I first encountered this particular species for the first time in 1964, I was captivated more by its fearsome reputation than as a toothy fish swimming around in an aquarium. Woody Trout, the Pet World owner/dealer in Oxnard, California sold me my first red piranha. By the way, Woody and I still communicate after all of these years and he still owns Pet World! These piranhas do better with large groups of similar sized fish in a large aquarium. Fin-nipping and body bites do occur, but as long as they are properly fed, the injuries should remain minimum if given a large enough space and plenty of cover.

For the aquarist, a minimum sized 40 gallon tank would be sufficient for one P. nattereri. Smaller sized aquariums would not allow the fish to reach its growth and health potential. P. nattereri are known to grow at least 14 inches TL in the wild.

I am often also asked what size of aquarium can you keep four or more red-bellied piranhas in. My reply is simple, bigger the better. If you cannot afford a large enough aquarium to keep your fish safe and healthy then I question how you will be able to keep it alive in the first place. Piranhas have been kept successfully in small 20 gallon aquariums, but I note over the years from experience these fish are not healthy and become lethargic. Lastly, because this piranha species purchased price from pet store to pet store is variable, I want to simply state the price for wild color varieties of nattereri is justifiable. The "home-grown" variety are simply more color-washed out than wild caught. Though any piranha flopping about is dangerous, in the aquarium the domesticated piranha seems to be a bit more docile. However, this changes rapidly if the fish is left unfed for any length of time.