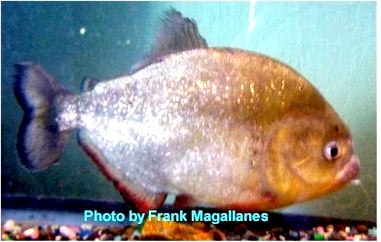 Stress vs. Piranhas In The Home Aquarium

All photos by Frank Magallanes

We receive much of our input on stress via science, but primarily aquaculture industry. Fish are more susceptible to stress than most other animals. So what is stress, and how do we define it? The easiest way to look at this for fish is outside stimulus. It requires a physiological reaction by the fish to properly react to that stimulus. So the effect is a physiological response to a stressor (outside influences). It can also be internal responses by the hormones by either environmental or some other factor that takes the fish out of its normal physiological resting state. This is also called homeostasis (see Selye, 1973). Stress by itself can disrupt the normal physiological balance (or homeostasis) by forcing energy to be reallocated to other parts of the fishes system.

The levels of stress can be acute or chronic. It can also be mild or very severe. Much of its impact on the fish is based on the health and the duration of the stress factor. Since fish are water animals, they require more energy consumption than humans who breath air. Water is much denser and it also acts as anti-gravity (buoyant) by allowing fish to float suspended. It also requires more metabolic energy to move around in.  Regardless if fish were created to live in those type environmental factors, they still need large amounts of energy which is consumed by its metabolism.

In its normal natural environment, survival is the key word and the response to stress protects the fish and insures they will survive. Fishes are equipped with catecholamine which is a chemical that is released into the blood stream. This gives the fish an energy boost to escape or evade being bitten or eaten by another piranha. Too much chronic stress can make a fish dysfunctional and lose this ability. As stated earlier, fish are more sensitive to stressors than other vertebrates because of the fishes physiology which is intimately intertwined with the water and its surrounding environment. Fish are able to detect water disturbances or ion homeostasis during stress through the gills (body fluids) and the ambient water. Included in this ability is the high bioavailability of chemicals in water. Pollution can also effect the delicate respiratory surfaces of the gills.

Fish respond to stress on three levels. This integrated stress response includes: primary, secondary and tertiary levels. The primary response is the release of the stress hormones, corticosteriods and catecholamine, into the bloodstream. The secondary response is the effects of these hormones at the cellular level including the mobilization and reallocation of energy, osmotic disturbance and increases in cardiac output, oxygen uptake and transfer. The tertiary response extends beyond the cellular level to the entire animal. It inhibits immune response, reproduction, growth and the ability to tolerate additional stressors (Bartelme, 2003. Pickering, 1987. Maule, et al, 1989. Barton. et al, 1986. Mesa, 1994).

HOW DOES ALL OF THIS RELATE TO PIRANHAS IN THE HOME AQUARIUM?

Present research does indicate that no matter how calm your fish may appear in a home aquarium, it is having some type of stress. It's unavoidable. The degree depends on what you are doing, have done, or continue to do. Where there is little to no activity outside the aquarium, the fish is very aware of vibrations that filter through the water. Whether its a door slamming in the background or you drop something on the floor the water is the conductor of those vibrations to the fishes sensory organ. Water chemistry can all effect the stress level, to include temperature changes. Introducing food or even a new tank mate can also lead to stress for the piranha. According to Dr. Shawn Prescott who wrote an extensive article on this subject, he had this to say:

Compare this to the typical Aquarium. Some of us do change a percentage of the water in the Aquarium, usually about 10% (if we do) weekly. Many do not even do this.

Instead of a natural ecosystem to manage the various subtle changes that are bound to occur, when we keep our specimens in an artificial habitat, we rely upon filters, often changed infrequently, UV's to kill off as much as can, Ozone to purify, chemicals to supplement what we think needs to be replaced, ( the evidence for such replacement is too often questionable).

It's rather like asking us to feel good in the rather aseptic environment of a hospital ward. Probably alright, (some today even question that), but it hardly leaves the average person feeling that they would like to go there as they felt so good in that atmosphere. In both freshwater & marine environments there are many forms of natural plant life . Many of these act as part of the food chain either directly for the fish, or indirectly by contributing to other forms of life which eventually are eaten by the fish.

I know of no "plastic" forms of plant that exist in nature, but far too many of our Aquarists seem to think that this artificial media, looks nice and is useful. I personally would seek to disagree.

Furthermore in many of revered Public Aquariums, I have seen the same plastic rubbish replace the real thing, as evidently the professionals who are employed to run these Mecca's of entertainment are not provided with the means by their money masters, to achieve what should be for so many good reasons an essential educational tool.

If one talks "off the record" to many of the Curators of too many Public Aquariums, you may be horrified to hear just how often they have to replace their fish etc. In some cases the record is as bad as Aquarists who have little or no experience. So much for conservation of Nature.

Again the reason is in many cases, that to create a stress free environment is one that requires a great deal of expertise, planning & the funds & personnel to make it work, on a long time basis. When this is absent, whether it be in a Public Aquarium or one in our home, then stress is a typical consequence, & fatalities are to be expected, as disease manifest itself.

SO WHERE DO WE GO FROM HERE?

In conclusion, try to make your fish as comfortable as possible in the home aquarium. Try to avoid the trap of confining too many in a given space. Practice good fish husbandry and above all else, do not be fooled by the mind's eye that just because your fish looks fat and happy, reproduces for you, that all is well. They are not living in a total stress free environment, contrary to what you are thinking or seeing. To consider otherwise is nonsense. Be watchful for situations where the fish is near air bubbles or streams. This may indicate a problem with the respiratory system. Young fish tend to find places to hide and aerators often do the trick in providing them a curtain to hide behind. Some species like S. rhombeus require heavy flow (oxygenation) and in my opinion on observation, they do better with a suitable powerhead. They are deep water fish often found near rapids and this addition will help the fish exercise more and respire better.

Another thing to consider is the body color darkening, respiring heavily, and clamped fins syndrome. If you see your fish do this, then very likely your fish is suffering some type of illness. Immediate treatment should begin once you have correctly identified the actual problem. Lastly, don't be afraid to ask other more experienced aquarists for help in determining fish problems. It can help solve your fishes problem and perhaps save its life.