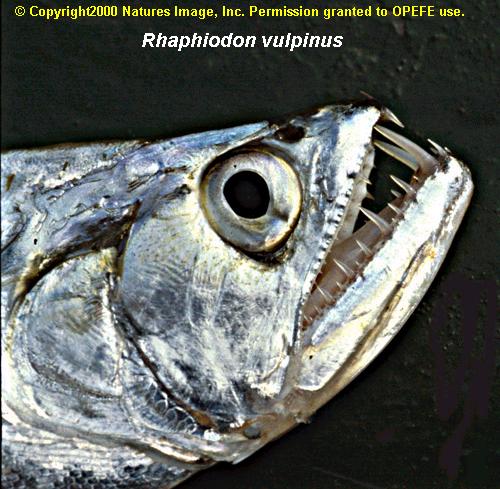 Buckup and Petry (1994) examined extra-oral series of teeth in the larvae of genera Hydrolycus and Cynodon, a feature previously reported only for Rhaphiodon vulpinus (Géry and Pivre, 1979), and proposed this feature as a synapomorphy for the Cynodontinae. The presence of the 3 row of teeth in larvae and young juveniles is a synapomorphy for the family, since all 3 genera have it. Buckup and Petry did not find any evidence that Acestrorhynchus, Oligosarchus nor Cynopotamus have similar dentition transition from larvae to juvenile.

They named the dentition as follows:

The loss of the two series inner ridge and extra-oral teeth, seems to follow the same sequence in all 3 genera. This loss is the same for Hydrolycus and Rhaphiodon. Petry assembled entire transformation series, however, the work remains unpublished. During my visit with Paulo, I was afforded the opportunity to review the specimens and the laboratory work while at Oregon State University during this time frame.

The species was placed under numerous generic names by various authors;

The species R. vulpinus was originally described from a single specimen collected by Spix and Martius in the rivers from Brazil ("Brasiliae fluviis"). However the precise locality was not recorded by collectors. There seem to be a large degree of overlap in their meristic and morphometric characters studied (Toledo-Piza, 2000).

The species appears to be monotypic with their geographic distribution being; main rivers and their tributaries in the Amazon basin from the Rio Ucayali system in Peru, eastward to Rio Xingu in Brazil; lower to upper portions of Rio Orinoco basin; Rupununi River in the upper Essequibo River system in Guyana; Rio Paraná/Paraguay, and Uruguay basin, south to Rio de la Plata in Argentina.

The lack of additional collected specimens from some regions has been the basis for tentatively identifying them as R. vulpinus. Geographic variations of the species is found in the Rio Orinoco, Rio Amazonas, Rio Paraguay-Paraná, and Rio Uruguay sytems. Specimens collected from the Rio Negro seem to lack quinine for their color is a tan ground coloration on sides of body and head, dorsally slightly darker.

Rhaphiodon is the most widely distributed of the subfamily Cynodontinae in South America and the less speciose. Neither Hydrolycus or Cynodon occur south of the Amazon basin in the Rio Paraná/Paraquay and Rio Uruguay basins.

USE YOUR BACKSPACE OR CLICK HERE TO RETURN OTHER PREDATORY FISHES

USE THIS LINK TO RETURN RESEARCH PAGE OR USE YOUR BACKSPACE