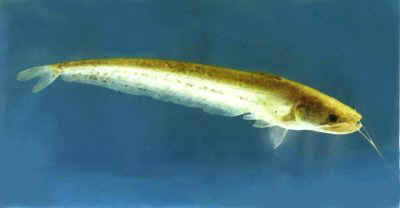 I originally wrote this OPEFE article in 1996 and it is long overdue for an update and explore some of newer material on this interesting species. Since then, new species have been described and updated. Below is Jean -Francois Helias holding a sub-adult Wallago (identification pending).

The Tapah as it is known in its native land is a large catfish. Once reaching over 6 feet, this catfish is now found in much smaller sizes. Reportedly, the natives fear the species because of its believed habit of eating small ducks, dogs, and small children.  It is thought the Tapah became this aggressive due to natives laying to rest their dead in the water. The catfish would then see this as a ready supply of food.

Conditioned feeding of human corpses over the centuries created a fish that has a taste for humans! Or so it was said.

While investigating this species, I spoke to a pet shop owner (n Michigan) and former biologist, Jim Smith. He kept  a Wallago on display. A customer was inquiring about the fish and Jim  tried to convince a disbelieving customer about this fishes aggressiveness. The customer wasn't impressed with Jim's comments because the fish just laid on the bottom of the aquarium without moving. He was also curious why the pet store owners kept several large heavy blocks on top of the aquarium cover. He was soon to find out during feeding time for this beast!!!

According to Jim in his recount of this story, the fish nearly flew out of the aquarium attempting not only to bite the fish being introduced for food, but also tried to escape from the aquarium in an apparent attempt to go after the person feeding the fish. The customer needed no other explanation. I still remember Jim chuckling over the customers startled look and running away from the aisle where the fish was.

The Belle Isle Aquarium also reported similar behavior from the Tapah. Employees are warned to be very mindful of this fishes tendencies to bite the hand that feeds it. These fish are dangerous and not for the faint hearted. Only the biggest of aquariums should house these fish.

The fishes habits are well documented and human corpses have been recovered from the fishes stomach according to Dr. Warren E. Burgess (1991).

The upper teeth and lower measure 4 mm in length. As seen on these images, the teeth point towards the back of the throat. Inside, on either side of tongue are additional teeth which point forward.

INFORMATION FROM FISH BASE (See references below)

Found in large rivers, lakes and tanks. A large, voracious and predatory catfish which thrives in heels with grassy margin; mostly hides under holes in river banks and canals. Associated with deep, still or slow-flowing water with a mud or silt substrate. Sluggish and stays on muddy or silty bottom in search of food. Juveniles feed mainly on insects; adults feed on smaller fish, crustaceans, and mollusks. Abundant during the warm season; a pre-monsoon summer breeder. In the Mekong, it is reported to migrate to smaller streams, canals and to the floodplain during the flood season. When the water level in the Mekong drops and the flood recedes, it moves to the Mekong or larger tributaries, where it stays in deep pools until the next inundation period. Destructive to other more valuable food-fishes. Bites strongly if handled, with its huge mouth, formidable jaws, and band of conical teeth.