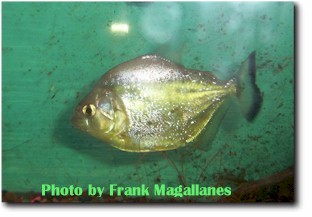 In writing this condensed version of the Tropical Fish Hobbyist Magazine account of Hiroshe Azuma breeding S. gibbus (= S. maculatus) I focused primarily on the actual method and equipment used. It is well-known today that S. maculatus can be bred in smaller containers (more than 45 gallons) and in the wild are found in small groups of 20 or more individuals. This does not mean in your aquarium you can do the same thing. Caution must be exercised or you could wind up with just a few specimens or just one! The spawning of this species is not rare, but will take a hobbyists as much effort to meet certain conditions like those for breeding P. nattereri. S. maculatus spawns year-round just like P. nattereri and almost anyone can do it if they follow certain steps. One other thing to consider is S. maculatus is from the Rio Paraguay, Rio Parana (Paraguay and Argentina). According to OPEFE water chemistry page, natural water and chemistry would be as follows:

WATER: pH 6.5-7.5 (7.0), 4-14 dH (8). Although in nature, the Paraguay piranhas can sometimes tolerate water temperatures as low as 59°F (15°C), it should be kept in water with a temperature from 70-77°F (21-25°C). This information would also be helpful if you are attempting breed the Paraguay Ternetzi (P. nattereri). H. Azuma used a much higher temperature to facilitate spawning. It's a given that warmer water makes a fish become far agitated and prone to breeding.  With hobbyists I have spoken to (in particular Tony Ostazewitz, circa 1997), he informed me that his S. spilopleura (= S. maculatus) was breeding at the lower temperature end (77- 80F). Tony also used a homemade spawning mop and bare tank. The fishes were egg scatters, using the spawning mop pretty much made the task easier to keep the eggs confined to one area. Many aquarists go to a lot of trouble to set up water chemistry and aquascaping to get their fish to spawn. The problem seems to be to get them in the mood and try to simulate (and stimulate) their spawning season. While it is true that most fish spawn seasonally, it is not necessarily because it is compulsory for them, only that the habitat regulates when they can go. If the habitat allows continuous spawning, most commonly in hydroelectric reservoirs, then the fish will take advantage of that. An example is the Brazilian piranha Serrasalmus spilopleura (S. maculatus), which changes its behavior to spawn continuously in reservoirs.

Tropical Fish Hobbyist Magazine published an article on breeding S. maculatus by Hiroshe Azuma (June, 1990). It is without a doubt the best recorded spawning of this species in a captive environment.

Azuma used a 220 gallon tank equipped with an abundance of plant growth and hiding places. Water chemistry was soft and slightly acid and the temperature kept within the parameter of 80-84F. The age of the fishes was approximately  3 year old adults and these were carefully watched for any aggressive behavior towards each other. Atypical for almost any piranha species, fin nipping and body damage occurred during the actual spawning activity. However, it is well known that piranhas heal rapidly from the majority of these bites. S. maculatus does not practice brood care, at least not during this experiment in the captive environment. However, in the wild it is reported they do or at least protect the eggs. Azuma noted that once the fishes were ready to spawn the female begins to fill with eggs, though her abdomen does not swell very much....perhaps only 1.2 to 1.3 times its normal size. Like most mating piranhas, the male color darkens and its scale coloration is more brilliant. When you see these changes happen and think you have a pair, separate them  and condition them on a variety of foods, preferably alive.

You can then (after 2 weeks) try to breed them. The male is added first, then the female is added a day later. Here is where you must be careful. The male becomes very excited and may actually severely injure the female. But this is not carved in stone and not all males behave this way. Some males will actually wait up to 10 days before even showing any interest in spawning. According to Azuma, if it happens at all, it will usually happen (spawning) by the 18th days or more. Spawning begins in the late afternoon and continues for about three hours. The fish press close together near the bottom and male curls his anal fin under the female's abdomen, presumably to better insure fertilization of the eggs. Azuma noted that his male fish would cut off pieces of plants near the spawning site.  All of this prior to spawning and did not eat any of the plants the fish had cut. Azuma was not sure why that happened.

It is conceivable to get as many as 800-1200 eggs which are scattered. Once spawning is complete, it is best to remove the parents. Eggs hatch at a temperature of 82F within 54 to 58 hours. Fry are free-swimming after about a week and then can be fed brine shrimp nauplii. You can then graduate to tubifex worms and bloodworms (according to Azuma).