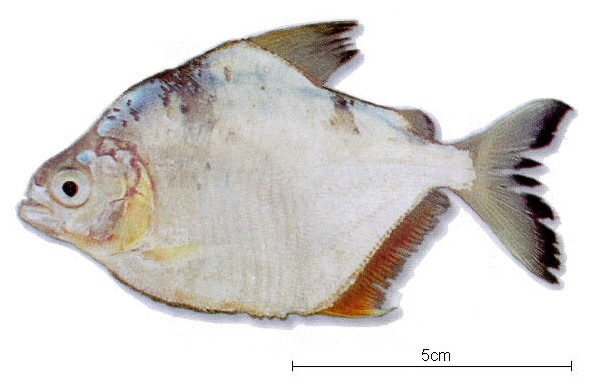 Historically, this species is problem all by itself because Carl H. Eigenmann erected genus Pristobrycon using this species as the type. P. calmoni has ectopterygoid teeth and a preanal spine (so does P. aureus). This feature is absent among  P. striolatus, P. careospinus and P. maculipinnis. This problem has created a situation where these last 3 species may be placed into a new generic rank as suggested by Freeman et al (2007). The assertion is based on DNA evidence collected, but is still not complete enough to withstand the test for a new genus name. Presently P. calmoni is restricted to Venezuela, however Jégu in his citations also describes it from Brazil. There are indeed similar appearing forms in Peru (see image 1 and 2 below). But it remains uncertain if these species are indeed P. calmoni or another form.

The species are generally found in areas known to be calm (lakes and pockets of water). The juveniles are mostly found in heavy vegetation, while the adults are found in smaller canals Rio Cuyuni-Essequibo. Their eating habits are variable ontogenetically and fixed. Juveniles generally consume micro-crustaceans, insects and occasionally small seeds. The adults are predators primarily during the summer, then consume fruits and seeds during the rainy season when the rainforest is flooded. It is a clear water species where it is sympatric as juveniles with P. cariba and S. rhombeus. The area also undergoes a period of a dry season from October - March. The rainy season runs from April - September. Young specimen's have bright silver bodies and may have a red, orange, or yellow anal fin with a dark border. There is a small oval humeral spot behind the opercle, fins are hyaline. The caudal fin has a terminal black band or simply a dark "V". The species is primarily found in Venezuela, however some samples have been found in other localities

Pygocentrus calmoni, described from Pará by Steindachner (1908), as a Pygocentrus was assigned as type of the genus Pristobrycon by Eigenmann (1915). The characteristics of the species place it outside the clade recognized as Pygocentrus. The type is lost. (FINK, 1993).

Pygocentrus bilineatus, described as a Pygocentrus from the Aruka River of Guyana by Eigenmann (1909), was put into synonymy of Pristobrycon calmoni by him in 1915. Types from CAS and FMNH examined (FINK, 1993).

FROM FRANK MAGALLANES: In the video Ivan refers to the species as Pristobrycon striolatus. That is not correct. The fish was later identified by Dr. Antonio Machado-Allison as Pristobrycon calmoni. The upper left corner of the video correctly identifies the species. Also note as you view the video the dangers of holding any piranha species in your hand is clearly demonstrated. The darker, highly colored fish is a breeding adult.

This species was reported to have spawned at the Aquarium at Gruga (ESSEN), Germany(Schulte, 1988).. However, It is my opinion this species identification might have been wrong and was more than likely S. nigricans (S. nigricans is considered a synonym of S. spilopleura, Fink 1993).  My rational is the species name S. calmoni has appeared in several hobbyists fish magazines on a photograph of S. spilopleura (= S. maculatus).

For aquarists this is a species not seen in the trade. No information if can be kept as a group, species is considered rare. It is therefore suggested, should the species become available, that they be kept solitary and not as a group. It is more than likely the species is a fin biter.

USE YOUR BACKSPACE OR CLICK HERE TO RETURN PRISTOBRYCON PAGE