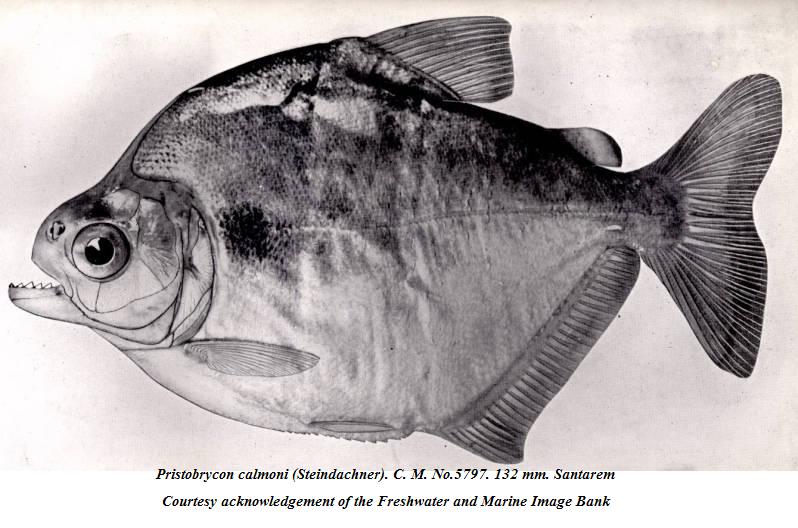 Present study (Freeman, et al.) suggests creating a new genus and placing Pristobrycon striolatus as the type. P. striolatus does not have ectopterygoid (palatine teeth) or a preanal spine. Also considered being placed with P. striolatus is P. careospinus and P. maculipinnis.  The other remaining members of this present genus do have the ectopterygoid teeth and preanal spine. The suggestion is these species that do have the preanal spine should be moved into genus Serrasalmus. But that maybe problematic because of the teeth and other structural problems. The use of the tree in that paper may have its own inherent problems. Strongly suggest hobbyists not draw any conclusions based on that work until more work is produced to better evaluate the situation.

Hobbyists and researchers are also reminded that some species have been added and removed several times by historical ichthyologists in this genus. A good example is Serrasalmus eigenmanni. This species has been added and replaced in Pristobrycon and Serrasalmus. It has not been resolved to this day because there are nominal species named in different countries that are problematic.

Intermediate in technical characters between the fierce Rooseveltiella without palatine teeth, and the less blood-thirsty Serrasalmo, with a series of permanent teeth along the palate. They are the least  destructive of the piranhas. Head short and deep, the snout short; palate with few or no teeth in the adult, the teeth sometimes, as in aureus, more fully developed in the young; cheeks only partly armed; mouth rather narrow, the upper jaw not very oblique, the lower jaw not very prominent.

Key To The Species Of Pristobrycon

calmoni (Steindachner). 13. aa. Numerous dark brown cross-bands dividing below the lateral line into narrow stripes; second suborbital but little higher than eye, its length 1.5 in its height; greatest width of naked area of cheek equal to about one-half the length of the suborbital; head 3.33; depth 1.66; D. 17; A.3ior32; serrae 32; interorbital 2.75; origin of dorsal an orbital diameter nearer to snout than the base of the caudal striolatus (Steindachner). 14. 10. Pristobrycon scapularis (Giinther).

* Spelling error in the manuscript

Norman (1929), later would  consider Eigenmann's work and revised Pristobrycon as a synonym of Serrasalmus. He did recognize differences (i.e., S. scapularis, S. serrulatus, S. striolatus, and S. calmoni) in other species but chose instead to keep the division. With Pristobrycon striolatus, the one species not fully reviewed by Eigenmann in his placement above, Norman found palatines sometimes roughened, but without teeth (page 795, Fishes of the Serrasalmoninae, Norman 1928).

Machado-Allison (1982a, 1983, and 1985) discusses the validity of the genera in this subfamily using Phylogenetic analysis concluding that this genus is more closely related to Serrasalmus than with any another group of the subfamily. In the manuscript; Los Peces Caribes de Venezuela (Machado-Allison and Fink, 1996) a new key was proposed for Pristobrycon, pg. 7: 3a. Cabeza robusta con el perfil dorsal convexo. Ancho de la cabeza (12.5-18.9, usualmente 15.5% del largo estándar). Sierras prepélvicas 15-20 (usualmente 17). Dientes ectopterigoideos ausentes en juveniles y adultos. [trans: Robust head, convex dorsal profile. Wide head (12.5-18.9 usually 15.5% of the standard length). Serrae prepélvicas 15-20 (usually 17). Ectopterygoid teeth absent in young and adult.]. serrulatus, P. striolatus, and P. eigenmanni are very similar appearing species. Body shapes are very close and delineating the species is difficult since body spotting may appear similar depending on ontogeny. The ontogeny of the species when juvenile run almost parallel with S. irritans because of the elongated body and the dark 'V' on the base of the caudal peduncle (hypural margin). The problem's I have encountered in distinguishing the species is the body shape. All of these species are discoid and most possess a small humeral spot. In small sizes, they also resemble some Serrasalmus species.

It is presently unknown, if the presence of a humeral spot (or lack of) has anything to do with water conditions that might effect the pigment on the flank or belly coloration. It is known that Pygocentrus nattereri is found in a variety of colors, depending on several factors in relation to geography as is S. rhombeus. It would seem plausible that the same may hold true of these other types of serrasalmin. Another form of Pristobrycon is P. calmoni. The species calmoni lacks the bars and stripes common to Serrasalmus (Pristobrycon) eigenmanni. Three new species of piranha have been discovered, two of them being Pristobrycon. They are P. maculipinnis and P. careospinus. Pristobrycon, with the exception of P. striolatus, forms a clade with Serrasalmus gouldingi that is the sister group to the Serrasalmus-Pygocentrus clade (Guillermo Orti).

Piranhas and their relatives have proven to be a challenging group from a systematic perspective, with difficulties in identification of species, linking of juveniles to adults, diagnosis of genera, and recognition of higher-level clades. In this study we add new molecular data consisting of three mitochondrial regions for museum vouchered and photo-documentedrepresentatives of the Serrasalmidae. These are combined with existing serrasalmid sequences in GenBank to address species and higher-level questions within the piranhas using parsimony and Bayesian methods. We found robust support for the monophyly of Serrasalmus manueli, but not for Serrasalmus gouldingi when GenBank specimens identified as S. gouldingi were included in the analysis. “Serrasalmus gouldingi” sequences in GenBank may, however, be misidentified. Linking of juveniles to adults of the same species was greatly facilitated by the addition of sequence data. Based on our sampling and identifications, our data robustly reject the monophyly of the genera Serrasalmus and Pristobrycon. We found evidence for a well-supported clade comprised of Serrasalmus, Pygocentrus, and Pristobrycon (in part).

This clade was robustly supported in separate and combined analyses of gene regions, and was also supported by a unique molecular character, the loss of a tandem repeat in the control region. Analysis of specimens and a literature review suggest this clade is also characterized by the presence of a pre-anal spine and ectopterygoid teeth. A persistent polytomy at the base of this clade was dated using an independent calibration as 1.8 million years old, corresponding to the beginning of the Pleistocene Epoch, and suggesting an origin for this clade more recent than dates cited in the recent literature. The sister group to this clade is also robustly supported, and consists of Catoprion, Pygopristis, and Pristobrycon striolatus. If the term piranha is to refer to a monophyletic clade, it should be restricted to Serrasalmus, Pygocentrus, and Pristobrycon (in part), or expanded to include these taxa plus Pygopristis, Catoprion, and Pristobrycon striolatus. Accepted by Gilbert: 31 Mar. 2007; published: 28 May 2007

Phylogram of combined ribosomal and control region sequences. Analysis includes specimens appearing in bold font in Figure 7. Proportion of trees from posterior distribution possessing a given clade below branch, parsimony bootstrap proportions (>50%) above branch. Specimen sequences from original material appear in shadow boxes, associated number in parentheses (1–33) correspond to numbered specimens and information presented in Table 1 and elsewhere. GenBank sequences are followed by gb. Arrow marks branches with lengths that were not significantly different from zero. GenBank (gb) species with asterisk (*) indicate taxa of which we question the identification

Piranha systematics are undergoing major revision and much remains to be done. For example, a functional key to identify many juvenile and adult piranhas is lacking. In spite of the hurdles remaining, we are confident that continued and more detailed genetic analyses combined with further scrutiny of morphological characters will ultimately produce a clear picture of piranha and serrasalmid phylogenetic relationships. Progress will require inclusion of other Serrasalmus and all or most of the remaining Pristobrycon species. Of particular importance relative to the piranha clade is the need to determine if genetic analysis consistently separates all Pristobrycon species with pre-anal spines from those without and if, as has so far been shown with P. striolatus, those without a pre-anal spine are separate from the clade consisting of piranhas with pre-anal spines. (Freeman et al.)

Given the continued confusion and complexity, the work remaining is still substantial. Future studies of serrasalmid phylogeny should include: 1) combined genetic data, including additional unlinked loci and anatomical analysis of new material and reanalysis of older specimens, and 2) careful documentation of specimens examined, including vouchering of all material and establishment of photographic archives of specimens studied. (Freeman et al).

Copyright© 1994-2016 Oregon Piranha Exotic Fish Exhibit (The OPEFE fish exhibit is permanently CLOSED as of 2000) Sutherlin, Oregon. Information posted on this web site is archival data on fish scientific classifications and other information. DISCLAIMER: The copyrighted material may not be used for any purpose other than private study, scholarship or research. Cited information requires credit and this link www.opefe.com. All rights reserved. All images shown  (unless otherwise noted) is property of OPEFE.