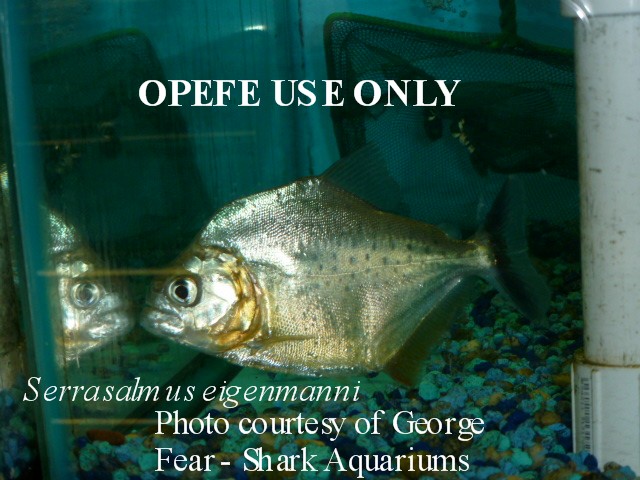 I remain uncertain on this species, since I have very little information on it from other localities including lack of photographs, and of course the historical problems with the humeralis group as a whole. Further complicated by historical description problems that included many fish in this group on a limited range of examination. The only present review was Fink and Machado-Allison (1996) pertaining to the Venezuela species. But subsequent follow ups by J?gu has left  me very confused on species identification and its natural range that is beyond my understanding at this time.

There are some respected ichthyologists who think S. eigenmanni might be limited to Guyana. Which is the type locale. And all those Brazilian eigenmanni might be the undescribed species. Much more work needed. The relatively simplest way to separate serrulatus from all those eigenmanni is by observing the preanal serrae. Also, if the owner of fish can track it down to a Peru import then it can't be eigenmanni because it is not listed from that country, but serrulatus is. The S. serrulatus photos in the Schleser book (if you happen to own it) are good examples of Peruvian S.serrulatus.

For the time being, S. eigenmanni, S. hollandi, S. humeralis, S. serrulatus, Pristobrycon calmoni and S. nalseni may be species that will remain an enigma for me. With the influx of specimens at the hobbyist level and lack of sufficient locality data, will not make identifying this species any easier. Especially, those that might appear to be S. serrulatus, but may be S. eigenmanni instead or possibly a new species.

Norman (1929) mentions only one specimen (type of the series) in the original description. The Holotype is unique. Adding to this is Pristobrycon aureus which some authorities place as a synonym to this species. However Pr. aureus is currenlty a valid species.

This is my first attempt at placing this species by locality. Please expect errors until more specimens are sampled and the locality data verified. The species listed below with a question mark (?) may be a represented as S. serrulatus in that region according to historical records. At OPEFE research aquariums, I noticed  the humeral spot was sometimes present on this species, while other times, the spot would literally disappear with a water changes or under a form of stress. It was also noted that depending on the fishes condition, the humeral spot would appear very distinctive and prominent when approached by a prey fish, feeding or at rest. Once the species was disturbed the humeral spot would disappear from view. Unknown why this would actually occur in my aquarium. In formalin and in ethanol, I was not able to keep the spot intact for review and measurement. It is apparently solitary when adult (Machado-Allison y Fink, 1996). Preliminary information indicates the adult species feed on insects, crustaceans, fish and seeds/fruits. It is found and collected in the basin of the rio Cuyuni-Essequibo. J?gu in 2001 rehabilitated the species and now places this fish as a Pristobrycon and not Serrasalmus. See also S. humeralis. However, this placement is not recognized by all authorities.

A similar species appears to be S. humeralis-gracilior and first mentioned by Eigenmann (1915) and S. hollandi (Reinhardt in Lutken,1874).

There is mention in Norman (1929) where he thought S. eigenmanni looked more closer like S. serrulatus. Norman placed synonymy of S. aureus and S. gymnogenys with S. eigenmanni.

S. humeralis synonymy placement by Norman under S. rhombeus. Interestingly, S. humeralis was also placed as a synonym with S. marginatus (Valenciennes, 1847). Norman says in part about eigenmanni........"Upper part of body with round dark spots; an indistinct diffuse mark on the shoulder; basal part of caudal dark..."further " regarding S. serrulatus..." Upper part of body with round dark spots; basal part of caudal dark.."  Both these species were compared with S. gymnogenus. Norman concurred that both the two specimens above "were certainly identical with gymnogenys." The name S. humeralis-gracilior does not appear again until G?ry revised the standing in 1977. He placed this species as a synonym of S. rhombeus. S. humeralis as explained by me on the species page is also a troublesome taxonomy.

In these 2 photos, The fish appeared to be S. serrulatus. However, Messr, J?gu states the characteristics of this fish is in all probability S. eigenmanni.

(Venezuela) The body is silver without dark markings; the ventral region is reddish-orange in adults, silver on juveniles. The head is silver changing laterally to dark around the dorsal and mouth region. The opercle plate corresponds with reddish-orange coloration. The iris is a creamy-white to silver with a black band transecting it. The pectoral and ventral fins are tinted orange. The anal fin towards the front is orange with melanophores making it very dark in that region. The dorsal fin is dark. The adipose fin is dark with a clear border. The caudal fin forms a dark "V" similar in appearance to S. irritans.

Other localities may produce a fish with yellowish-orange overtones on the cheek and belly, vertically elongated spots on the upper flank with small round spots below the lateral line. The differences on coloration may be related to water chemistry.

Recommend keeping as solitary species in home aquarium. Some hobbyists report keeping this species as a group, not a wise idea. Adults are reportedly solitary. They are fin biters and eat chunks of fish. A 55 gallon aquarium should be sufficient for one species with live plants. Follow care below under breeding. Aeration would be moderate without power-head.

The breeding of this species has not been accomplished by hobbyists. Presently there is no information on habitat pertaining to this species. According to  preliminary information indicates that the adults include insects, crustaceans, fish and seeds/fruits, (Machado-Allison. 1996) which it captures in the main channel or drainage pipes as part of their diet. The water from which this species is found is largely acidic (pH 6.5 - 7.0), turbulent during the raining season and clear in the spring. The temperature of this water is in the range of 22-26?C. There is thick aquatic vegetation. My recommendations of a tank size on an unknown species is at best conservative. I would use a 200 gallon tank, thickly planted with moderate filtration (wet/dry preferable).  The substrate should be a combination of sand and gravel. As an interesting proposition, I would add a large cylinder (PVC) pipe on one end of the tank to be used as a hiding place or a potential nesting area. Light requirements (moderate) would probably be the same as S. rhombeus (a species found in the same locality). The area also undergoes a period of a dry season from October - March. The rainy season runs from April - September. Characiformes usually are visually-oriented diurnal fishes with large eyes; they dwell in well-lit surface waters (Lowe-McConnell 1975, Fink & Fink 1979, Moyle & Cech 1996). In contrast, catfishes are primarily nocturnal and have sensory adaptations (e.g. tactile and chemical receptors) to low visibility (Hara 1971, Lowe-McConnell 1975, Fink & Fink 1979). Another problem with these types of fish is that they are fin biters and you may lose some specimens (due to predation) before anything significant happens in your aquarium. Like the vast majority of piranhas, the breeding process can be very bloody and pieces of flesh or fins will be part of the process. But in the end  you will have accomplished a most rare occurrence for the home aquarium.

In June 2020 Philipp Bayer successfully bred Eigenmanni for the second time in Spain.

Copyright? 1994-2012 Oregon Piranha Exotic Fish Exhibit (The OPEFE fish exhibit is permanently CLOSED as of 2000) Sutherlin, Oregon. Information posted on this web site is archival data on fish scientific classifications and other information. DISCLAIMER: The copyrighted material may not be used for any purpose other than private study, scholarship or research. Cited information requires credit and this link www.opefe.com. All rights reserved. All images shown  (unless otherwise noted) is property of OPEFE.