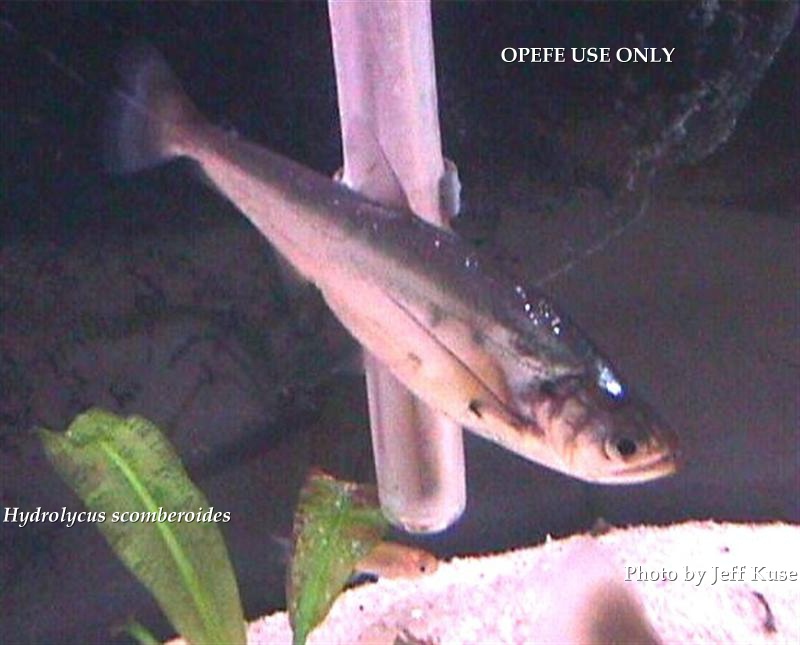 All Photos by Jeff Kuse, unless otherwise noted

Pirandirá (Hydrolycus species) are characin members of the Neotropical fishes in subfamily Cynodontinae.  The big fangs are a main characteristic of this species and although they might seem to be an adaptation for feeding behavior, no casual mechanism can be inferred.  Long canineform teeth and their oblique mouth help make the species distinctive.

A special thank you to Edouard Paiva for furnishing these extraordinary photos.

There are currently 4  recognized species in genus Hydrolycus, and can reach at least 650 mm SL. The fish are not considered a food item, though there is other interest in it as a commercial sports fish (Mendes dos Santos et al., 1984; Taphorn, 1992). A new tagging program to discover the fishes life cycle is planned by a sports fishing group in Venezuela which value this fish for its sporting capabilities.

The Cynodontinae live in all types of water at either mid or surface level of rivers, lakes, and the flooded forest. They are common in the Rio Orinoco and Rio Amazonas basins. The Guiana's also has the species in the rivers that form the Atlantic slope. A sister to Hydrolycus, Rhaphiodon vulpinus, locality is southward to Piraná-Paraquay and the Uruguay basins. The Cynodontinae are not found in the Rio São Francisco or in any of the coastal drainages in northeastern Brazil. Interestingly, some fossil teeth were found in the Rio Magdalena reportedly belonging to Hydrolycus (Lundberg, 1997). Other discoveries were found in Argentina (Cione and Casciotta, 1995/1997).

These are areas once thought to be outside the known range of recent Cynodontinae. The Cynodontinae include Hydrolycus, Cynodon, and Rhaphiodon. OPEFE does not have any specimens of Cynodon in ethanol nor formalin so I am not able to display the fishes appearance here. However, the genus Cynodon closely resembles Hydrolycus except for some rudimentary features including a longer anal fin. Generally speaking, the species as a natural group has never been contested, probably due to the similarities in body form and generalized external features. Also, their very distinctive features from other types of Characiformes make this a very unique group. A problem still exists with the placement of this group into a family. Prior to Howe (1976) no author made definitive comments about the relationships of the Cynodontinae. Greenwood et. al., (1966) excluded Cynodontinae from the family Characidae and placed them in their own family, the Cynodontidae. However, no further information was given concerning their relationships with other Characiformes. Attempts to find shared derived characters with other Characiformes has proved difficult. Howes (1976) concept of the Cynodontini included Roestes. Herein, the Cynodontinae includes only the genera Cynodon, Rhaphiodon, and Hydrolycus. Lucena and Menezes (1998) placed Cynodontinae (as herein defined) together with the Roestinae (which included Roestes and Gilbertolus) in the family Cynodontidae.

The genus Hydrolycus was erected by Müller & Troschel (1844). They took the species then named Hydrocyon scomberoides in placed it in this new genus.

Schomburgk (1841) described a new species as Hydrocyon armatus from British Guiana (=Guyana), but later that species was placed as a synonym of H. scomberoides by famed American ichthyologist Carl H. Eigenmann (1912). Other species were described by Günther (1866), Gill (1870), Cope (1870). Both Schultz, 1950 and Géry, 1986) made several revision's for the genus. In spite of their being four nominal species, there existed confusion in the literature concerning the taxon name usage. Géry (1986) and Géry & Mahnert (1988) studied the problems associated with the confusion and concluded that H. scomberoides and H. pectoralis applied to the same species, therefore be treated as a synonym. They based their decision on misidentification by a previous author's.

The availability of specimens over the last few year's, particularly those by Michael Goulding from the Brazilian Amazon and now deposited at MZUSP, illustrated that the species is more heterogeneous than previously recognized. Géry (1986) reviewed the specimens and was able to recognize un-described species but chose not to name them or attempt to decrease the population's range.

The pirandirá is a very odd looking and once you see one you will agree.  Their looks alone remind one of the deepsea fishes found in the world's ocean. The swimming angle is also bizarre and is reminiscent of the characin head standers.

The species are being imported into the aquarium trade and OPEFE had a few specimens available for examination (both living and dead). They do not seem to live long in the home aquarium and this might have more to do with their lack of adequate space, food and water conditions needing to be fast, pristine, and constant water changes. They seem to require a large spacious aquarium of over 500 U.S. gallons. Most hobbyist attempt to keep the fish in aquariums smaller than 100 U.S. gallons and this is not adequate for this large fish. The home aquarist pattern of purchasing a fish that will grow to large for the home aquarium is like those vegetarian fish called pacu/or tambaqui. It might be pretty and bizarre looking when small, but they grow huge.

The largest size I have been able to maintain in the aquarium was just over 15 U.S. inches. The captive species H. scomberoides, grew rapidly in just a very short period of time, starting just at 6 inches and reaching its maximum aquarium size in just under 2 years before mortality. Other hobbyist who have tried to raise this fish in the aquarium had similar experiences. No explanation can be given as to why the fish died. Though the size of the aquariums and lack of proper requirements could be the reason the fish do not do well in captivity.

Certain states, like Texas, have banned public and private possession. It is feared these fish (and its sister in genus Rhaphiodon ) could populate the states rivers and destroy native fish population.

The pirandirá eat small fish and in the home aquarium are voracious feeders. They tend to form small schools but are territorial to a certain degree. You will need a good, tight fitting lid as these fish are quite capable of leaping great distance. Their oversized pectoral fins are built for just that type of activity, but it is unknown whether or not they can use it for flying like hatchetfish, (genus Gasteropelecus), a distant relative.

The method of attack on small fish documented here at OPEFE in 1994 is so fast that only a slow motion camera can show the circular pattern of movement. The fish opens its large mouth, trapping the fish, in some cases, spearing the prey fish. It then skillfully manipulates the fish around its mouth in order to swallow it head first! They are indeed magnificent specimens.

The fish Hydrolycus  below (1)  is about one foot long, captured from Barcelos area,

Catoprion mento - the Wimpel Piranha (2).  Is placed side by side with Hydrolycus species.

1. - Serrations present on the exposed field of scales in all specimens above about 100 mm SL; pelvic-fin base laterally inserted, distinctly above ventral profile of body; black spot at base of the innermost pectoral-fin rays; Rio Amazonas and its tributaries above mouth of Rio Tapajós....H. scomberoides

- No serrations on the exposed field of scales; pelvice fin base inserted along ventral profile of body; no black spot at the base of the innermost pectoral-fin rays....2

- Anal-fin rays covered by scales to approximately one half of their length; 27-37 branched anal-fin rays; length of largest dentary canine 18.2-29.0% HL; ground coloration of body silvery or yellowish-tan....3

Restricted to the Rio Amazonas and its tributaries above mouth of Rio Tapajós.

A new species, from the Rio Amazonas basin, the Rio Capim and Rio Tocantins, the Upper Rio Orinoco, and the Rupununi and Essequibo Rivers in Guyana.

Bright silvery, darker along dorsal portion of head and body. Elongate blotch of dark pigmentation posterior to opercle. Proximal half of caudal-fin rays (and to a certain extent anal-fin rays) reddish to orange, with some individual variation in the intensity and tonality of coloration. Adipose fin dark, with diffused black pigmentation.

Etymology. The specific name, tatauaia, is from the Tupi word tata, fire; uai, tail, in allusion to the reddish to orange coloration pattern of the caudal fin of this species. A noun in apposition.

A new species, is found in the Rio Negro and upper portions of the Rio Orinoco basin. Differs from its congeners by its dark body coloration, the lack of scales covering the anal-fin rays and by the relatively less developed dentary canine. Hydrolycus tatauaia, a new species, from the Rio Amazonas basin, the Rio Capim and Rio Tocantins, the Upper Rio Orinoco, and the Rupununi and Essequibo Rivers in Guyana is most similar to H. armatus from which it differs in the lower number of lateral-line scales (102-119), the reddish to orange caudal fin coloration and dark spot on the adipose fin diffuse. Hydrolycus armatus is redescribed; it occurs throughout the eastern and central portions of the Amazon basin, in the Rio Orinoco drainage from its mouth to its upper reaches, and in the Essequibo River in Guyana. Hydrolycus scomberoides is restricted to the Rio Amazonas and its tributaries above mouth of Rio Tapajós. Hydrolycus pectoralis is a junior subjective synonym of H. scomberoides. (Toledo-Piza, et al.).

Etymology: The specific name is in honor of the naturalist Alfred Russell Wallace, who illustrated this species during his expedition to the Rio Negro, in the nineteenth century,

LINKS TO OTHER RELATED FISH