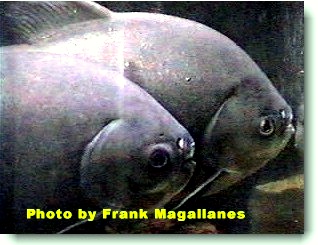 PACU HARMLESS OR A MENACE?

I received many letters in the past about, how unfair states laws are. Yet hobbyists ignore the basic fact their peers are creating the problem in the first place by releasing unwanted fish. I hope home aquarists who want to collect piranhas as pets can see what happens when they ignore common sense and why laws are then proposed prohibiting their piranha or other predatory fish.

The map above is data collected from newspapers and personal correspondence from aquarists across the USA including information gathered from Nonindigenous Aquatic Life (Nico 2002) In one or two states the fish and wildlife officials misidentified the fish as a pacu instead of an actual piranha (NICO, 2000). The idea behind my map above is to illustrate how foolish aquarists are by releasing unwanted pet fish. This species is also being found in other countries including Australia. Unfortunately, they are being misidentified as piranha. The Pacu (genus Piaractus) was deliberately introduced in Papua New Guinea (source: River Monsters, Jeremy Wade). The pacu was indeed biting people! VIEW

WHY PIRANHAS ARE PROHIBITED

The capture of pacus and the media frenzy that follows proclaiming this fish piranha, unfortunately, lead to laws prohibiting piranhas from public fear even though the identification is usually wrong. But that in itself should warn people who keep piranhas as pets that their actions could promulgate additional laws to prohibit their pet fish. The capture of vegetarian pacus in open lakes, rivers, streams has been the driving force to prohibit piranhas in most of the United States.

OPEFE in the past has received many donated red-belly pacus that have grown to large for the home aquarium. Pacus have actually been reported in nearly every lake, river, canal in the United States. Most recently two more pacus not reflected in the map above have appeared in Utah and Tennessee (The Greenville Sun, 2000). If this continues it will not surprise me if statutes are enacted to prohibit pacus from being sold or possessed by the home aquarists.

According correspondence between myself and Dr. Antonio Machado-Allison (University of Venezuela), he states, "Pirañas in our aquarium dies frequently when the temperature get below 23 C." Large winter kills of piranhas of red piranhas are reported from the upper and lower reaches of Paraguay (south of Ascunción, Paraguay). The temperature that reportedly drops below 40°F (4.4ºC) during their winters. Interestingly enough, piranha populations have never been discovered in our close neighbor, Mexico. It is my understanding, though not verified that piranhas are illegal in that country. Germany which is one of the colder countries than America, also prohibits piranha. India, Malaysia, Vietnam are countries that recently prohibited piranhas. Vietnam reported captures in their waters, but my communication with their authorities in trying to collect data regarding those captures has been unanswered and unverified. Even still conservationist fear the legendary piranha with good reason, people must stop being irresponsible in their actions when it comes to deposing of a pet. Release of non-natives hurts everyone as well as future generation of native fish a lesson U.S. fish conservationists are learning after they introduced game fish that were non-native throughout the  United States.

There are a few recorded cases of piranha introduction in U.S. waters in over 60+ years this fish has been available to the home aquarist (See MAP above). That in itself is a miracle considering how long these fish have been available to the pet industry. In Hawaii on the island of Oahu (Wahiawa Reservoir) in 1992 a mature female Pygocentrus nattereri was captured in 1993 (NICO, 2000). There was no indication the species had become established (Radke 1995 and NICO, 2000). The piranha was quickly destroyed.

Four other instances were found on the mainland in Florida where a small population (S. rhombeus) was found in Monkeyland amusement park pond and 3 Pygocentrus nattereri were found as single captures in 1974 Dade County and Palm beach county 1979, which resulted in the lake being treated with rotenone killing all fishes present including all native fishes. However, just as recent (1998) a Pygocentrus nattereri (identification verified) was captured in Canada in a lake. That specimen was obviously a tank raised piranha according to Dr. W. L. Fink who spent time examining the fish (pers com. Fink, 1998). Piranhas have been reported captured in ten states, including Florida, Hawaii, Massachusetts, Michigan, Minnesota, Ohio, Oklahoma, Pennsylvania, Texas, and Virginia (Nico, 2000). However, few were actually documented as a piranha and might have been a pacu instead.

The author (Magallanes) strongly recommends that no species of Serrasalminae/Serrasalmidae be kept in outdoor pools regardless of how noble or great the idea is. The risk is not worth it.

Below is a partial list of non-native Characidae found in U.S. waters:

Since I wrote the above in 1995, 1000's of more fish species have been released by idiotic hobbyists in U.S. waters.

USE YOUR BACKSPACE OR CLICK HERE TO RETURN RESEARCH PAGE