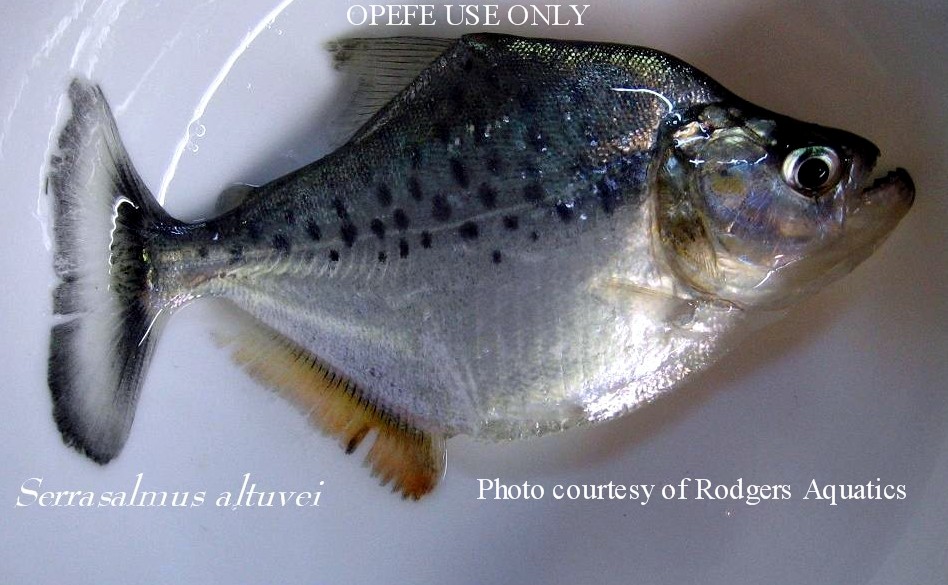 This species is occasionally found in shipments from Venezuela as S. rhombeus or marketed simply as as a white piranha for its often silvery appearance as a juvenile. Later this body color deepens to a much darker fish.

Recommend keeping as solitary species in home aquarium. Any attempts to place more than 1 S. altuvei together will very likely wind up being damaged or killed. I kept this species alive for a number of years in a 55 gallon aquarium. They seem to enjoy moderate filtration and live plants. It was not unusual to find the fish mouthing or biting the plants from time to time. They grow fast at first, but then slow down as they reach 6 inches. I have had this species in my collection over the years and they are basically the same as far as behavior. They bite fins, so I would not recommend tank mates, including their own kind. As stated above, damage will likely occur. Water temperature 78F to 82F, pH 6.8 to 7.2. Care would be same as S. compressus. Live food is not necessary, they will eat chopped shrimp and fish. The map shown herein are approximate range of certain species. It does not show the complete range.

Jégu and dos Santos (1987) noted a species of Serrasalmus characterized by a greatly compressed body, in the lower Rio Negro of Brazil. They identified it as S. altuvei Ramirez (1965), originally described from a tributary of the Rio Orinoco in Venezuela. In their paper they described the specimens and compared them with data from the original description by Ramirez. Although they attempted to examine type specimens of S. altuvei, those specimens were not available at that time. Subsequently, Jégu et al. (1991) described S. compressus from the Rio Madeira of Brazil, comparing it with specimens they considered to be S. altuvei. Fink and Machado-Allison (2001) determined, however, that the Rio Negro species is not S. altuvei. Serrasalmus compressus is a valid species, similar to S. altuvei of Venezuela. Hobbyist who have purchased the compressus group are usually having a difficult time differentiating this species from its close sister S. compressus. Both species share some common traits and a good eye can usually help to separate them if one carefully reads the description. S. altuvei was originally described in Evencias (Ramirez 1965) with no photograph other than a drawing of the species. Examples were moved to an aquaculture station in Caracas where many were lost or damaged due to neglect. One paratype of S. altuvei was salvaged by curators of MBUCV. Fink and Machado-Allison were able to obtain samples not only of S. altuvei, but also two other similar species placed as S. compressus (Jégu and Dos Santos) and S. hastatus, a new species (Fink and Machado-Allison 2001). Both S. altuvei and S. compressus are very similar in body shape and coloration, but there are morphometric differences between them.  Some large adult S. altuvei have faint dorsoventrally extended spots forming short  vertical stripes, but these are shorter and much less numerous than the vertical stripes of S. hastatus which is dissimilar to the other two. In comparison, there are other subtle differences from morphometric counts which help aid in separation. The dorsal profile , which in S. compressus is more concave in the supraorbital (behind head) region and more convex posterior to the supraoccipital spine (top area in front of dorsal fin) than S. altuvei. The ventral profile of the belly of many specimens of S. compressus ventrally protrudes to a greater extent anteriorly (body wider) than S. altuvei. All of these features are more pronounced in juveniles than in adults. Juvenile pigmentation patterns also separate Serrasalmus compressus and S. altuvei. Young S. compressus have larger and denser spots that extend more fully over the ventral body and belly than in S. altuvei, where spotting is sparse below the lateral midline.

S. altuvei is not a common species. It was described from the Rio Orinoco and is restricted to clear waters of Venezuelan Llanos. It is rare in collections and is apparently rare in the wild. S. altuvei along with S. geryi (Jégu and Dos Santos (1988), S. compressus, S. altispinis (Merckx et al 2000), and S. hastatus (Fink and Machado-Allison, 2001) are members of a compressed group; based on their deep bodies and dorsoventrally elongate belly serrae and compressed body.

The breeding of this species has not been accomplished by hobbyists. The species is very rare and its actual requirements are not known. However, there is some material (compiled here) that may be of some use to hobbyists wishing to try breeding this species.

Light requirements (moderate) would probably be the same as those found in Llanos of Venezuela. Orinoco rivers: pH: 4.5-7 (6.0); 2-8 dH (6); 75-82°F (24-28°C). Because this species has never been bred in captivity, it is my recommendation that a 200 gallon or larger tank be used. Also suggest heavy planting of the tank with a gravel and sand mixed tank be used. Filtration should be moderate to strong (wet/dry system recommended). I based my conclusion on the "bigger" tank theory because it remains unknown what the minimum tank size would be for such this species which is more rhombeus-like in its habits. S. rhombeus is found in open rivers and very likely this fish is too. Water changes, while important is not as important as keeping the water stable and within the parameters suggested above.  In comparison, P. nattereri hunts, feeds, in an area several miles from the breeding ground. Yet, P. nattereri has been bred in small aquariums (55 gallons). Hobbyists are reminded that breeding any species of Serrasalmus sp. is risky but not always impossible, as evidenced by breeding of S. spilopleura, S. maculatus, S. rhombeus (this latter one was bred in a minimum tank of 900 U.S. gallons in a public aquarium). S. rhombeus requirements (see S. rhombeus breeding) are more needy because it is a large species (over 14 inches). The area also undergoes a period of a dry season from October - March. The rainy season runs from April - September.  Characiformes usually are visually-oriented diurnal fishes with large eyes; they dwell in well-lit surface waters (Lowe-McConnell 1975, Fink & Fink 1979, Moyle & Cech 1996). In contrast, catfishes are primarily nocturnal and have sensory adaptations (e.g. tactile and chemical receptors) to low visibility (Hara 1971, Lowe-McConnell 1975, Fink & Fink 1979). Another problem with these types of fish is that they are fin biters and you may lose some specimens (due to predation) before anything significant happens in your aquarium. Like the vast majority of piranhas, the breeding process can be very bloody and pieces of flesh or fins will be part of the process. But in the end  you will have accomplished a most rare occurrence for the home aquarium.