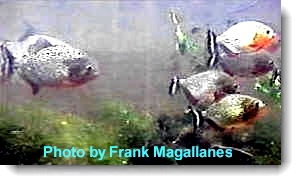 Piranha Pecking Order In The Aquarium

I dedicate this page to Wayne Mah, and Arnold Querido, true pioneers in large piranha experimentation in the home aquarium

One of the most common problems in piranha aquariums is trying to figure out what exactly the fish are doing with their behavior. Are they getting along? Why do they stay close together? Or why do they act like they want to bite each other, yet don't? Breder (1927) and Myers (1932) both published essential facts on some silvery characin. Breder wrote about his experience with Astynax in Panama. These small characins, like other predatory fish, will immediately tear up and eat any injured member of their school. Myers wrote about Astynax in west Texas where he splashed the water and the minnows swam away from fright, but the Astynax were attracted by the commotion. According to Myers, these 3 to 4 inch characins swarmed around him, very alert to any movement he made. Any physical movement would draw the fishes attention to that spot. They kept, according to Myers a foot or so away from him, but very alert, relatively motionless and waiting. With Breder's experience with a different Astynax species in Panama. These fish were larger (about 6 inches). These fellows were not only attracted to Dr. Breder, but they actually bit him in hordes. They attacked the tender parts of his body and it was not exactly painless. Myers also related an experience in Lagoa Santa, Brazil where he swam in a very clear lake and Hemigrammus under 2 inches, bit his body hair and pulled! Those particular fish were the primary food source for pirambeba found there. According to Dr. Myers, the more dangerous piranhas very likely act the same way as the smaller characin they experienced.

Another thing to consider is whether these fish shoal or group. I covered this topic quite extensively in another topic at OPEFE, but I think its important for reader's to understand the word shoal is actually a loose application and nothing wrong with using it when describing fish your aquarium. But realistically, there are problems with its literal use.  As stated to me by Dr. William L. Fink (the authority on piranhas), the species doesn't typically shoal. So what do they do? They instead form small groups of equal sized individuals (as discussed below in another portion of this topic), which I humorously call the piranha pecking order.

The photos above demonstrate the piranha pecking order. One can see how the group forms similar sized fish, generally pointing in the same direction. Often the fish movements will mimic that of its neighbor's to avoid attack. For example if one fish turns, so does its neighbor in the same direction to avoid attack. The larger adult fish takes the lead either in front of the smaller fishes or behind as seen in the photo above. Also noted, the larger fishes will not allow anything beside it, behind it or in front. It will turn around and dash at the fish. This threatening behavior with the gills and mouth open is aggressive posturing to cause the fish behind it to flee. Sometimes this will lead to bites, sometimes, tail slapping, often times the fish simply swims quickly away. At issue appears to be territorial markings. What this means is, the fish will find a spot, declare it as its own and anything coming into that spot is considered a threat. Generally, the species will exhibit bite suppression, which is like a truce among themselves and this requires that they are able to recognize members of their own kind. The other requirement has to do with similar coloration. Both contribute to the bite suppression among the species (Schulte, 1988). But that alone does not prohibit them from biting each other should they go into a feeding frenzy or in spawning condition. This similar body shape and coloration also camouflages other species like Metynnis or Colossoma to join piranhas groups without harm in some cases. It is nearly impossible to observe the natural formations of fish in the Amazon, so much of what we are able to obtain is examination of certain areas where fish are collected, measured, and data written. One such report is furnished below called a Partner choice in piranha shoals:

Although the red-bellied piranha, Pygocentrus nattereri is widely portrayed as a pack-hunting predator virtually nothing is known about its shoaling behavior. Using fish collected in the flooded forest of the Brazilian Amazon, we conducted a range of choice tests to determine whether individual piranhas make non-random shoaling decisions. These revealed that partner size had a significant impact on shoaling preferences. Piranha shoals were size structured with large, sexually mature, individuals occupying the central zone (defined as within the polygon connecting fish at the edge of the shoal). Small, non-reproductive individuals showed greater motivation to feed. Fish did not discriminate between size-matched individuals from the same and different locality and we found no evidence of intra-specific aggression, despite the piranha's reputation for cannibalism.

This habit of grouping as I earlier described above is fairly common among genus Pygocentrus. Small groups of Serrasalmus rhombeus have also been observed to group together within a foot or more distance between them (Wolves In The Water, Discovery Channel). However, public aquariums attempting to group S. rhombeus together usually meet up with fatalities until only one of the species remains alive. Crowded aquarium conditions can cause more bites to the fin and body, particularly if the fish are not fed regularly or live in stressful conditions. Overdoing water changes can also create stress if the water and temperature is not the same or it is too cold or hot. It can also create health issues since they are already under a lot of stress because of the captivity. When species of another genus are intermixed the more aggressive fin biters are habitually attacking the non-fin biters. No pecking order is established just protective group posturing. This protective group posturing (facing the direction of the attacker) makes them appear larger in size. A safety in number as usually seen in their normal prey fish. Smaller juveniles stay close together and are usually the first to sample food before the adults get a chance. They are also vigilant against attacks by larger piranhas who will see them as a quick meal.

The problem with captive piranhas is having an aquarium large enough to facilitate their growth. As a general rule and focusing on my own 40 year experience with piranhas, I would not recommend an aquarium of less than 40 U.S. gallons for individual species of Pygocentrus nattereri. Other species may require a smaller or larger aquarium depending on the species and its reported growth rate.

P. nattereri  can reach 14 inches total length, however 10 to 12 inches total length is average in the home aquarium. A 40 to 55 gallon aquarium would afford the fish ample space to live, swim, and grow healthy. Anything smaller would only make the fish more wary of its surroundings and also prevent the fish from attaining its full growth potential. There is no real method of preventing piranhas from establishing a pecking order other than being kept solitary in the aquarium. Smaller aquariums cause piranhas to be more nervous and agitated and fin biting can occur amongst themselves. Single piranhas tend to stay hidden for long periods of time, especially if glaring lights are used for illumination. Small groups of juvenile piranha (under 5 inches) tend to form large groups for protection. When this happens, they also practice natural selection, a process that allows the fittest to survive and to form similar sized groups. They attack the eyes, body and fins of their kin, including cannibalization of their own kind. Later as they mature, they then begin to form the recognized pecking order. Always cautious of each other into adulthood. They truly are social creatures as reported by some authors of piranha behavior, but their nature is to eat and eat quickly before their food is taken away by a much quicker and hungrier relative.

The other much larger and powerful species is Pygocentrus piraya. These also form large groups in the wild and their behavior is similar to P. cariba and P. nattereri. They also form groups of similar sized individuals as described above. Once they begin to reach sexual maturity, the group divide up into same size groups. They also become more aggressive and watchful for any unusual behavior of their kin. Should anything be out of the ordinary, they will investigate as a typical characin, which are inquisitive by nature. Any P. piraya caught unawares or caught off guard will likely have a fin clipped off or a chunk of flesh removed. Drawing of blood will excite the group into a feeding frenzy. That is the point where most hobbyists report the loss of a specimen. The other problem with keeping P piraya captive is its large natural size. They grow 15 inches or larger in the wild, up to a reported maximum size of 20  inches total length. Hobbyists generally keep these beasts in small aquariums of 100-200 gallons. They also attempt (foolishly) to keep large groups of them together without recognizing that these are not a small species of piranha. At the time of this writing, I have read certain hobbyists experimenting and exploring keeping these fish in groups of a dozen or more together in such small aquariums. As if they believe they can control the animal natural tendencies. Or as if their aquarium has some type of magical water that can suppress the bite inhibition. Readers are reminded, the study of P. piraya has been on-going for over a hundred (100) years. They are not a new species, yet some amateur hobbyists treat the fish as if they are or believe they are doing something revolutionary. I kept my first P. piraya in 1976 and kept it with several P. nattereri. As this fish matured it made a meal of those nattereri. The fish was a hefty 12 inches, while the 4 other P. nattereri were just under 10 inches. In 2004, I secured more specimens of P. piraya and their territorial needs were so great that it ate its tank mate. So now I keep one solitary species. I have no interest in group testing, because this is nothing new. Anyone that suggests otherwise, or believes they are pioneering something new, clearly has no understanding of the animal or what has been written before in the historical and modern writings of this species from field researchers and other truly serious aquarists. Wayne Mah, and Arnold Querido are two, true pioneers in large piranha species keeping for over 20 and over 10 years respectively. They both know the nature of the giant beast's in the home aquarium, yet their experience are largely ignored by a new generation of hobbyist found on the internet.