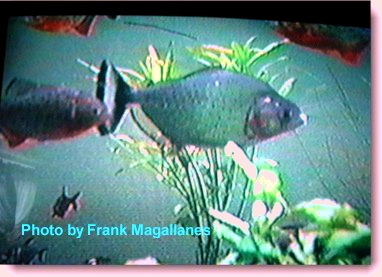 What is a shoal? Is Mixing Piranha Species In The Aquarium A Good Idea?

The photo above depicts S. rhombeus, P. nattereri and several small characins and catfishes. The piranhas eventually ate them all and then started in on each other! So what is a shoal? How is it applied in the home aquarium?

Let's get something cleared up. The most misused word in piranha keeping, the term; shoal and is defined this way:

In biological terms this is far more accurate:  Biology on line.

While it describes shoaling pertaining to fish-at-large. In the Amazon, nearly all fishes participate in annual piracema, where flood waters rage and huge shoals of various species migrate. In this vast migration of fish, you will also find young piranhas in huge shoals swimming mixed in with other species. This vast shoal is a protection against predators from the sky and in the water (ie; birds, mammals, crocodiles, etc.).  What these vast shoals are prey fish. Certainly piranhas would not be considered a prey fish unless it was a target of a bird, reptile or human for example. Piranhas figuratively speaking are largely a mix of predator and scavenger, or more correctly an opportunistic feeder. According to world expert on piranhas, Dr. William L. Fink, piranhas do not shoal in the literal sense. Piranhas form groups or more specific a school of individuals having commonality.  See further remarks my own opinion of pet stores and how they describe what they see.

Pygocentrus species form small groups of individuals that stay far apart from each other and group together when feeding frenzy or during fish runs. The same goes for Serrasalmus species. The aquarium is an area that is not the same in nature. You, the hobbyist, can jam the species and call it a shoaling but that is not what it really is, more like forced grouping. During the fish runs (in the wild) schools of fishes, including piranhas are seen. But again, this is nature putting them together, where in normal circumstances they are kept apart by natural processes and behavior.

So I cringe each time I read that someone is shoaling their fish (pet dealers are notorious for this assumption). While juvenile piranhas tend to congregate together for safety purposes, the same is not always present with the adults. Same applies to S. geryi and S. maculatus often referred to as a shoaling species. In the wild, they may form small groups, but your aquarium is not the wild. Piranhas as a whole are unpredictable and it is irresponsible to suggest that compatibility, which is the key word here, is predicable for these fishes. But can the word shoal still be used? Yes of course, but its important for the hobbyist to understand how this word is used loosely in the confines of an aquarium. I was reminded of something my biology teachers once told me, prey fish shoal, predator fishes eat. At the time, I didn't know exactly what that meant. With piranhas in the application, it makes perfect sense. Some academics have proposed leaving the term shoal for fishes that exceed 100. They argue that a shoal is actually like a large city where several thousand migrate in huge territories. Predators on the other hand, come together in small groups usually (less than 50) to feast on these huge shoals of prey fishes.

There will always be some aquarists that claim they keep their fish species mixed. Of course, neglecting to telling the hobbyist what they can expect from their expense purchases of different piranha species.  Often times, they will say that only fin-nipping occurs, or they kept them together for a period of a few months to a year. What they don't tell you is how unpredictable piranhas are! Lastly does it really matter what term is used (ie; school or shoal)? The answer is: Not really, the aquarium is an unnatural world to make a realistic definition for your fish and what it is doing.

The attempt at mixing various piranha species together usually ends up in disaster for the fish. It is OPEFE policy not to recommend mixing species for the above reasons. But if you have the money to keep buying piranhas, then you will have to live with the detrimental experiment this causes captive piranhas in the aquarium. Public Aquariums do mix species, but in those situations, they are in tanks that exceed 900 gallons or more of water. David M. Schleser, former curator of the Dallas Aquarium, remarked in his book seeing and being impressed with mixed species. These mixed species were kept in a 3,000 gallon aquarium and included over 30 adult P. nattereri in a heavily planted and sky lit aquarium. The species in this aquarium included 400 neon tetras, 100 marble hatchet fish, 200 bleeding heart tetras, and 200 gold tetras. All these smaller characins were ignored as they swam by or into these groups of large piranha in this biotope.

Part of the reason this is successful is because by nature, piranhas are not adapted  nor behaviorally inclined to feed on small prey fish. Even in my own home tests, the large piranhas (over 10 inches) ignore the small characins under 1 inch and did so for a few months. Ultimately, they were eventually eaten. So with some care, its possible to accomplish this in a home aquarium. But the risks still remain, but not carved in stone as you read further down.

Even within species of the same genus; fin nipping, eye loss and bites to the body can occur. Normally, only certain shoal-type species can co-exist with each other (such as genus Pygocentrus like those above). Do not confuse co-exist with compatibility. There is a certain amount of tolerance within a genus, but this can quickly change, particularly if something is not their liking. Also don't try mixing the species (i.e. cariba, nattereri, and piraya) within Pygocentrus together either, because it won't necessarily work harmoniously every time. Piranhas behave individualistic so it is not predetermined they will not bite each other. Click this link for more information on the pecking order of Pygocentrus nattereri.

Another consideration is; why spend the money on these interesting fish if your only desire is to cause suffering!?! It doesn't matter if your piranha is 1 inch or 20 inches, if they are hungry enough they will bite their tank mate. Piranhas are unpredictable, that is why they are considered dangerous and you cannot say for certain YOU FISH  WILL NOT BITE YOU! Anyone who suggests otherwise, has likely never been bitten by a piranha. It reminds me of the time (in my youth) when I was playing with a small piranha and holding it between my finger and thumb. I used to put toothpicks in its mouth just to see if it could bite it in two, it couldn't. Yet this very same fish was able to cut a nice 1/2 inch slice of flesh nearly off my finger after I accidentally caught it with my hand. Don't be afraid of your fish, but do have respect for it.

I have often been asked what is most dangerous piranha species?  My answer is, the one flopping about on the floor. Piranhas are specialized creatures, with some feeding on scales, fins or just flesh. All are capable of causing havoc, though often times, they don't....but do not trust that opinion too far.

HOBBYIST ATTITUDES TOWARD THEIR PIRANHAS

I have kept other fishes mixed with piranha for several months. However, sooner or later something causes the piranha to react negatively. And it doesn't matter how large your fish might be. I have seen small ones nip at large ones like little sly wolves. The idea that one species is badder than another is also an incorrect assumption and shows how little the person understands piranha behavior. Yet, I repeatedly see comments where one hobbyist has tried these experiments with relatives of the piranhas, such as; tetras, silver dollars and expensive characins like Exodon paradoxus and non-relatives like; cichlids, catfishes, etc. These attempts to put a non-piranha fish into a small home aquarium to co-exist peacefully with the predator is pure nonsense. Some published piranha books have foolishly suggested tank mates for piranhas! In the end, the tank mate will be food for a hungry piranha. And piranhas are always hungry!

One other thing the hobbyist must remember, captive piranhas behave differently than those found in the wild. The species S. rhombeus, as an example, has been known to form a small group in the wild. This group comes together during feeding frenzy. Once the feeding is done, they go in their own way. Behavioral-wise, the species is a loner and has been recorded as such by field experts. However, in the aquarium, the rhombeus must be kept solitary since no home aquarium is large enough to house the thousands of gallons needed to keep a small group together without harm.

Even with wild fish, the evidence of fin and body bites is common. In conclusion, sure go ahead and use the word shoal. Just remember how it really applied to fishes.