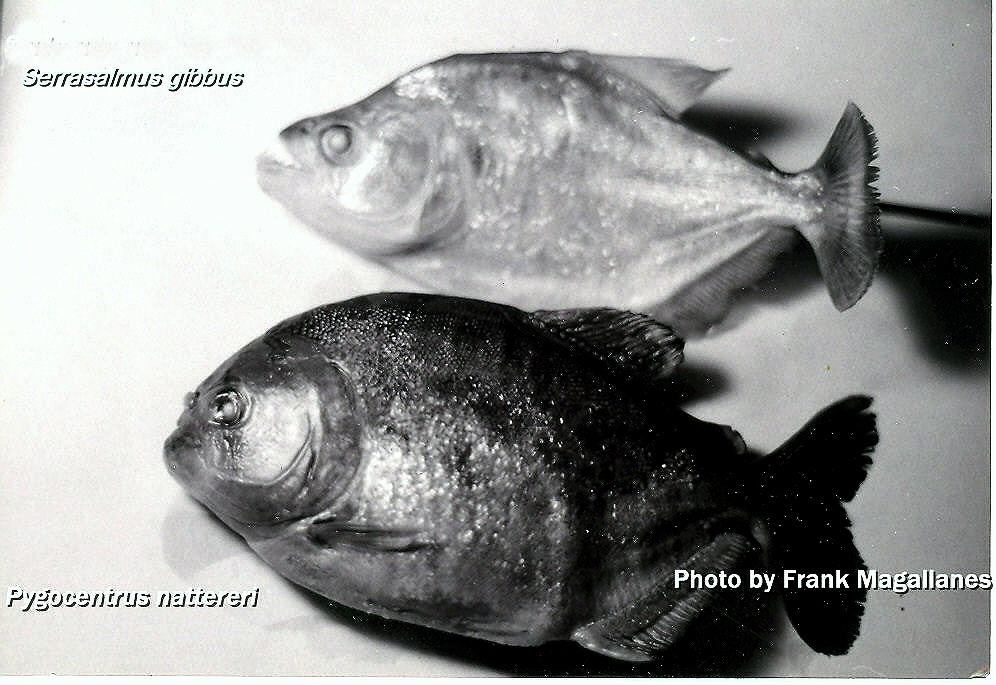 Photo of varying body shape of a Serrasalmus species (top) and a Pygocentrus (bottom).

The genus Serrasalmus is the beginning of piranha and pirambeba placement. It is based on the oldest species, the type genus Serrasalmus which was formerly the type genus of the family. This genus was erected for Salmo rhombeus (Linnaeus, 1766), the first species placed in the genus. The species of this genus pertain primarily to the species that feed on fins of other fish, primarily when juvenile, later graduating to whole fish. (Goulding, 1980; Machado and Garcia, 1986; Nico and Taphorn, 1988; Nico, 1990).

A new Serrasalmus species recently discovered in Venezuela is believed to eat plants (Machado, 2003), but at this time, the species remains un-described and unnamed. Like the true piranhas, scientists today now understand that these fish enjoy a wide variety of foods including plants and seeds. No longer are they considered strictly fin eaters, though that does remain part of their diet. Hobbyists today, have largely ignored this Serrasalmus diet and have experimented with putting these genus with other non-piranha species. Only to quickly learn, the beast will bite fins. While that in itself is not dangerous, should any part of the body or flesh be bitten and blood and juices released, then that fish will more than likely be eaten.

The genus has many problems because many species of piranha were lumped into this single genus Serrasalmus by historic authors. They form a natural group differing from other Characidae in the keeled and serrated abdomen, bearing a median series of sharp-edged bony plates with backwardly- directed points. They show further agreement in their compressed and (generally) elevated body, comparatively long dorsal fin, long anal fin with oblique base, small scales, naked predorsal line. Many of these species were described based on a single specimen, like Serrasalmus niger (Schomburgk 1841) and S. boekeri (Ahl 1931). This last specimen was based on an aquarium specimen with no exact locality. S. niger is the exception in it being a larger example of S. rhombeus according to Géry (1977:291).

The genus Serrasalmus as a whole are very confusing. These fish particularly when larvae, look very similar to Pristobrycon juveniles. Very little research has been done on developmental changes on the majority of species. The Serrasalminae are characterized by their many ontogenetic growth changes form juvenile to adult. This was evident from the historical placement of species based on juveniles, adults, and breeding adults being placed as a new species by authors who were not well informed on the variety of morphological changes these species would evolve from. Various authors have tried to cut down the number of species. Eigenmann (1915) recognized 12 species in genus Serrasalmus. Norman (1929) reduced the number to 8 species, and synonymized 12 of them. Géry (1972), recognized 2 species from Guyana: S. rhombeus and S. eigenmanni. Later this author would recognize only 12 species for the entire continent. Géry (1977), included new species as valid 9 species in Serrasalmus (subgenus Serrasalmus) and in 1976 in his work completed the synonymy.

Since the time of Norman (1929) and Géry (1972, 1976 and 1977), there has not been any serious attempts to revise the genus. Ahl (1931), Fernández-Yépez (1951, 1965), Ramirez (1965) and Fernández-Yépez and Ramirez (1967), described various species (a total of 8) but they did not come up with a list of characters and relationships for these species or newer ones they described. Mago (1970) recognized a total of 14 species in Serrasalmus. However, he followed previous authors and included species in genera Pristobrycon and Pygocentrus. Some of the species grow huge, for example S. rhombeus which can grow larger than 500 mm SL. The majority of these species in Serrasalmus are solitary and do not form any solid groups.

The number of species nominated, the difficulty in examining the types, which are spread out among various museums and countries of Europe, America, the loss of type specimens and the lack of good descriptions has been a hindrance for the study. This group is very important and does need to be revised with better descriptions, their ecology and economic importance in relationship to Phylogenetic and biology. Hobbyist generally confuse synonyms as actual species, usually the result of reading outdated and sometimes erroneous published piranha books that are available in pet stores.

Even today with the advent of DNA problems persist. Largely due to historical and modern taxonomical issues. Given the continued confusion and complexity, the work remaining is still substantial. Future studies of serrasalmid phylogeny should include: 1) combined genetic data, including additional unlinked loci and anatomical analysis of new material and reanalysis of older specimens, and 2) careful documentation of specimens examined, including vouchering of all material and establishment of photographic archives of specimens studied. (Freeman, B., Nico, L. G., Ostentoski, M. Jelks, H. J. & Collins, T. M. 2007).

Presently (2010) a new scientific book by Hubert & Renno, Evolution of the Neotropical Inchthyofauna (2010) has surfaced. This book addresses the molecular and evolution perspectives about the origin of fish communities in the Amazon. It also includes a new Bolivian species S. odyssei. This species was erected with mostly DNA geneBank. While revolutionary, it too may present future problems. The species has a strange resemblance to another species in Peru , S. sanchezi. When you visit the link on S. odyssei, you can access my book review in which I present some interesting opinions on this species. Or you can click VIEW for instant access. Back in the late 1990's M. Jegu was attempting to describe a piranha from the rio Catalao using DNA. Though the fish had a potential scientific name it never was never completed and published. Presently, that scientific name and partial description remains in the OPEFE vaults. Perhaps one day it will be released.

Lastly, the generic placement of these species in a family or subfamily has been hotly contested for a number of years. DNA has driven the original subfamily Serrasalminae to be tossed aside and is now called Serrasalmidae. Personally and professionally, I totally agree with it. Piranhas do deserve there own family name. However, the pacus will likely be kept in that group as well.